Vessa is the protagonist of her titular game, being a young child hailing from the junk-filled locale of the Scraplands. Having an intense adventurous spirit and willingness to help others, Vessa makes hit her goal to solve the problems of the people of Lostways, fending off many various sorts of threats in the process.

As a classical mute protagonist, Vessa is cheerful, optimistic, and incredibly curious. She has a passion for learning about and exploring new things, which seemingly stem from both her lonely upbringing in the Scraplands and her penchant for tinkering with machinery. Though rarely seen sad, this lonely side of hers occasionally reveals itself if she is isolated from others for a long time. Vessa is also notably affectionate to those who show her kindness, often showcasing this in the form of gifts or physical acts of affection like hugs.

Vessa is a young being who resembles a human girl in their early teens- it is unconfirmed whether or not she is a true human. Her most distinct features are her dark red hair and her overall scrawny posture.

Vessa's typical outfit consists of khaki shorts, a black and gold T-shirt, a small backpack, and black shoes. The colors of these clothes have demonstrated the ability to shift based on the various power-ups Vessa uses to augment her abilities. Her hair is often decorated with a small clip resembling a four-pointed star, which also changes based on power-up forms. Vessa's forearms are often seen wrapped in bandages, though this seems to be tied to her yo-yo rather than being a sign of injury.

In her natural state, Vessa has few outstanding abilities outside of above-average athletic skill and rather high intelligence concerning machinery. She is also notable for her use of a yo-yo weapon, which she is seen using for both combat and for traversal through environments.

Vessa's debut, featuring her origin as well as her introduction to her idol, Lord Hallan, and the girl who would later become close friends with her, Esselia. The game also features Vessa's first encounter with Pulzar, the dragon who would effectively become Vessa's primary rival.

Vessa makes a playable appearance in this first game outside her series. She is found fighting alongside Esselia as a Pair Unit.

Vessa makes a playable appearance in this crossover title. Notable for being the debut of her Light Mage form. 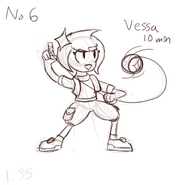 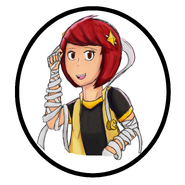 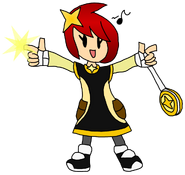 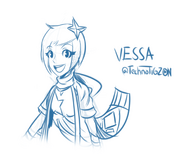 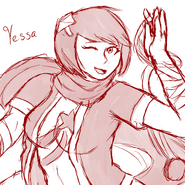 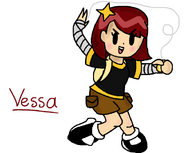 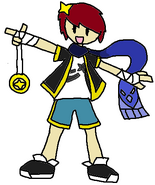