Vespiquen (Japanese: ビークイン Beequen) is a dual-type Bug/Flying Pokémon. It evolves from a female Combee starting at level 21.

Vespiquen is a bee-like Pokémon with yellow and black striped abdomen resembling an elegant ballroom gown. Underneath the expansive abdomen are honeycomb-like cells that serve as a nest for baby Combee. However, it appears to have a slender, more insect-like abdomen in the centermost cell, which is inconspicuous as the ‘dress’ usually obstructs the view of it. Vespiquen has black, skinny arms with two orange claws and flies with a pair of relatively small wings on its back. Its yellow upper bodies are a nearly perfect sphere and its waist is black and slender. A curved line on its back between its shoulders separates its thorax and waist. Vespiquen's orange faces have intimidating, red eyes, oversized, yellow, protruding mandibles, and a red gem on their forehead. The top portion of its head is similar to a headpiece with yellow and black horn-like projections, resembling a hairstyle historically favored by early medieval-period English queens. Vespiquen is a female-only species.

Vespiquen is a queen of a hive of Combee, controlling it and protecting it, as well as giving birth to young Combee. A Vespiquen is far more powerful than its followers, and will only take action if its Combee are unable to protect the hive. If outsiders prove themselves to it by defending its hive, it may repay these acts of kindness with a reward. It feeds on flowers to make honey. It then use it to bring up other Combee. Being a queen, it can command other Combee in order to use Attack Order, Defend Order, and Heal Order, her signature moves. 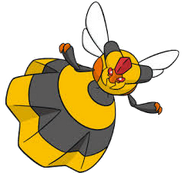