Venus Ice Traps are the Sub-Species of Venus Fire Traps that can shoot ice at Mario to freeze him like the Ice Flower. They first appeared in Super Mario World: Wii, and later in New Super Mario Bros. D.I.Y. 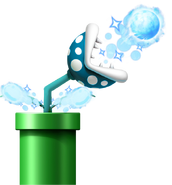 SMWWii
Add a photo to this gallery

Retrieved from "https://fantendo.fandom.com/wiki/Venus_Ice_Trap?oldid=257872"
Community content is available under CC-BY-SA unless otherwise noted.