Fantendo - Game Ideas & More
Register
Don't have an account?
Sign In
Advertisement
in: Free to use Characters, What is the New Fantendoverse?, Exotoro's Characters,
and 12 more

Veniz is a alien that crash-landed in the city of Fluxus Oceanum, a formerly hidden city in Italy, who uses the Standing Ripple known as Carpenter Brut. His Standing Ripple's origin is from CHELPRO, who attempted to give him powers through their resource of Ripplite. Unknown to anyone, Veniz likes to murder women and then dissect them for their organs for his own personal desires. The character was created by Helena Harper (t∣b∣c) as a direct parallel for Unten and Obena for CHELPRO, although this concept would be furthered out into a leader character that did not want to be a leader.

Veniz is a alien that crash-landed on Earth in the hidden city of Fluxus Oceanum, a city that is covered in windmills and is primarily based in the ocean. Veniz primarily hid away in the city as opposed to becoming a hero in it, beginning his string of murders. CHELPRO sought him out after learning of his file in F.A.N.T's systems, offering to destroy it in exchange for working for them. Veniz gladly accepted, although he became wary of CHELPRO attempting to push him as the leader of their superhero group and began to actively seek a replacement for this role. He would soon become accommodated with his Standing Ripple that went by the name of Carpenter Brut, who not only let him commit his murders more sneakily but would also allow him to hide evidence.

Veniz is an alien creature that can be summed as an "demon cat". He has sort of a inhuman, almost skeletal build that is both thin and tall and features a wide head with two black eyes with silver irises. He has silver colored teeth that are sharp. His head features two "cat ears" that stick out yet have the properties of bone. His hands and feet feature ridges across his fingers and his fingers are generally darker in color than the rest of his body. This same texture and color appears across his torso as well as inset in his arms and legs. These are biologically rubber and allow Veniz to be unaffected by electricity coursing through his whole body. Due to not wanting to stand out, he wears a red jacket with a black chinese-styled shirt, as well as a pair of green dress pants. He wears brown penny loafers.

Carpenter Brut is a crystal-headed Standing Ripple with goat horns growing out of it's head. It features bone pieces across it's torso and has a generally mechanical look with a blue-black and crimson red color scheme. It's arms are the most robotic looking, while it's legs take on a more ripped muscle look, held together by the bones of kneecaps.

Veniz is not interested in fame or popularity, contrary to the goals of many of his team mates and even his foes. In fact, the only reason he's in CHELPRO is because they agreed to erase his information from F.A.N.T's database, which would help him hide away from anyone attempting to look up his existence. He pays to be erased from search engines, and actively looks for ways to scrub information about himself. Even though CHELPRO wants to make him the face of their superhero group, Veniz is actively not interested and is attempting to look for a successor to take up this role as soon as possible.

Veniz almost appears secretive and has made no attempt to make any friends or alliances during his time at CHELPRO. However, Veniz isn't completely mute or anything of the like- if he never talked at all, suspicion would be drawn to him. Veniz plays a careful game of not wanting to be noticed so he can murder in secret, which he is more able to given his abilities. Veniz is somewhat of a surgeon, able to cut open and dissect things from his victims and then proceed to hide the evidence using his powers.

Despite not wanting attention on himself, Veniz builds himself up in a very egocentric way and talks to himself frequently, although not too loud and not if people are around. He enjoys pineapple juice and despises fruit punch. On the onset, Veniz does not appear to be a especially unique individual although his personal living quarters show either his vast collection of musical vinyls or the organs he has collected from his victims. Veniz almost exclusively picks female victims although seems completely uninterested in sex, likely due to his desires lying in touching and feeling organs. Veniz is not particularly picky about the species of his victims and takes quite a treat in collecting rarer alien organs.

Carpenter Brute is a fairly stationary Standing Ripple who only acts upon Veniz' command. It is impossible to tell the emotions of it.

Veniz's Standing Ripple, Carpenter Brut, makes up the bulk of his powers. As Veniz only features a partial immunity to electricity due to his rubber fingertips and other parts of his body, he eagerly signed up for a Ripplite treatment. Carpenter Brut's primary ability, Turbo Killer, allows Veniz to transform whatever he touches into bullets that he has complete control over, able to aim and fire just the bullets under his control without a gun, merely just making his fingers pointed out like a gun and using his ring finger to fire all bullets he has set up. This allows him to set up intricate traps using the bullets and fire multiple shots at the same time, all without needing to load or use an actual gun. The bullets can also be suspended in mid air but require Veniz to have one of his hands set up like a gun. He can also stockpile bullets and transform a crime scene into a bunch of bullets for later. He has a selective touch with his hands concerning the bullets.

Carpenter Brut's secondary ability, Roller Mobster, allows him to add roller skates onto the sole of any shoe he touches. These can be as big or as small as he wants, allowing him to create giant wheels of death under his feet if he wishes. While this may seem to be rather situational ability, Veniz can use two bullets via Turbo Killer and fire them at the wheels to get a speeding head-start out of a tricky situation or throw his opponents off balance by applying wheels to their shoes while they aren't looking. 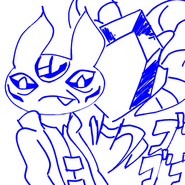