Velince the Fox is a character that will appear in an upcoming game. She is rather polite then other girls at her age.

Velince is a fox that looks rather similiar to Tails, except she have different coloured fur. She wears a band on her head, and yellow shoes. She is also wearing parts of armor on some parts of her hand. 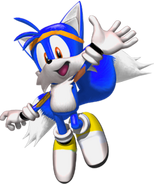 Lunar 6
Add a photo to this gallery
Retrieved from "https://fantendo.fandom.com/wiki/Velince_the_Fox?oldid=2257661"
Community content is available under CC-BY-SA unless otherwise noted.