Start a Wiki
“When Wario touches a particular enemy, he turns into a vampire! Wah, hah, hah, HAH! As Vampire Wario, he can change to bat form or vampire form. Each form gives Wario different abilities! Press the B Button to transform. To get back to normal you must... hmm, what could this vampire's weakness be?”
— Wario Land 3
Vampire Wario (known later as Vampire Bat Wario) is one of Wario's Reactions in the Wario Land series. It was introduced in Wario Land 3 and reappeared in Wario Land 4 albeit with some changes.

It also appeared in Dr. Mario 64 as a unlockable character. Due to this, Vampire Wario can almost be seen as a seperate character similar to Metal Mario.

When Wario comes in contact with a Kobatto or Minicula, he becomes Vampire Wario/Vampire Bat Wario. In Wario Land 3, this form had a vampire and bat form that could be switched, where as Wario Land 4 only had the bat form. In Vampire Form, Wario is able to defeat any enemy with touch. In bat form, Wario is able to fly instead of jumping, although he loses speed. When Wario comes into contact with a clove of garlic, light, or touches water he will revert to his normal form.

Appears as a power-up for Wario, Waluigi, and Ashley. It has been somewhat altered from it's original form, as it can now be obtained through the Vampire Jug. Vampire Wario can fly in the air by repeatedly tapping the jump button and has a enchanced dash that destroys purple blocks and enemies. It is removed after taking damage twice. When Ashley uses the Vampire Jug, she becomes Vampire Ashley and her spells become red swerving projectiles that drain health from enemies.

In Mario Kart Switch, it appears as a halloween costume for Wario.

Vampire Wario reappears in Wario World 2 as a transformation recieved by getting bitten by a Bloodbite, and is quite similar to the Wario Land games. The player is able to swap between two forms; vampire and bat. As a vampire, the player can defeat any and all enemies on contact, as well as be slightly faster. As a bat, the player can fly around freely. However, if they touch light, the player will revert to their regular form.

Waluigi, Captain Syrup, and Queen Merelda also gain their own Vampire forms. They are all rather similar to Wario's form, having a cloak and fangs, though Waluigi has a tophat and cane, Syrup wears a skin-tight suit under her cloak, and Merelda wears a full-body junpsuit under her cloak.

Vampire Wario appears as a downloadable racer in Mario Kart: V² Circuit. He is a mediumweight with a large size. He has slightly above average speed, below average acceleration, average handling and average traction. 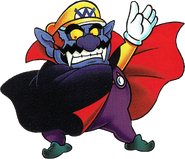 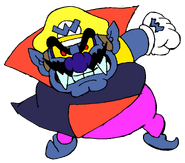 Vampire Merelda by Pokerninja2 (t∣b∣c).
Add a photo to this gallery
Retrieved from "https://fantendo.fandom.com/wiki/Vampire_Wario?oldid=3197955"
Community content is available under CC-BY-SA unless otherwise noted.