Valltaus H. Koopa is one of the Koopalings and is part of a Sub-Group called the Mythical Koopalings. Vallatus is the middle child of the seven and is the master of the element of Wind.

Vallatus is not as tall as Sirenae however is significantly bulkier overall. He has Blonde hair which forms a Spiked Mohawk, in addition he also has a beard, something none of the other seven Mythical Koopalings have. His Torso Plating is identical to most Koopalings unlike the other Mythical Koopalings. His feet however have his Feet Claws raised much higher allowing him to walk on Ice and other slippery surfaces without sliding. His Shell is Orange in colour and his spikes jut out much further than other Koopalings.

His eyes constantly look angry despite him not always being angry, this is due to his iris developing an odd shape, it doesn't appear to have impeded his sight in any way.

Through the various pieces of lore scattered across all the Mario Games, it is revealed that the Mythical Koopalings existed a long time ago, inidicating and confirming their lack of proper relation to Bowser. The Mythical Koopalings supposedly were from 300 years before the present day in the Mushroom Kingdom and originally helped Bowser's ancestors take over the Mushroom Kingdom and its neighbours until they were eventually sealed away in a Grand Star and Bowser's Ancestors were defeated.

Vallatus was an interesting case as he was known for his bombing tactics. Vallatus was a masterful tactician in offensive manuevers and commanded an immeasurable sized army of Parabeetles & Para-Bros. His fleet was known not for capturing strongholds but rather severely damaging them, allowing for ground units from the other Mythical Koopalings to finish them off. Vallatus was surprisingly well liked by his troops in comparison to the other Koopalings and was often known for his infamous Cyclonic Dive Bomber attack that had in one instance levelled and entire field through its destructive force.

Vallatus was the first Koopaling to become aware of the sudden captures of the other Mythical Koopalings and he planned his best to evade capture, he heavily reduced his army's size to merely that of a squadron and would only rest in relatively remote and isolated areas. However he made one mistake as during one of his resting periods, Vallatus was found and captured by a set of Blimp Yoshi Riders that had been following his trail for the weeks prior, Vallatus ended up being the fourth Mythical Koopaling captured and is argueably the turning point in the battle between Bowser's Ancestors and Peach's Ancestors.

Vallatus is a rather gentle soul among his seven siblings, he doesn't deliberately go out of his way to harm others but more or less has a poor control of his emotions. He is easily aggravated however also quickly overcomes such aggravations, transferring to another emotion. He also appears less intelligent than some of his other siblings although this may just be that he doesn't need to utilize his maximum capacity.

Like most Koopalings, Vallatus is able to spin rapidly in his shell to perform dash attacks as well as spit fire. Vallatus' Fire Spit is able to glide and hover in the air as well as explode after a few seconds causing splash damage.

Vallatus' primary ability is his power over Wind, this allows him to summon might gusts of wind that can carry him or his enemies high into the air as well as divert oncoming projectiles and make movement for enemies more difficult by shifting the wind towards or away from himself.

Vallatus along with the other 7 Mythical Koopalings will appear as Castle Bosses for the 8th to 14th Worlds in the game. Vallatus appears as the boss of the 11th World, Pokey Dunes.

Vallatus is a challenging Koopaling for most players due to his ability to release Ty-Foo levels of Wind which can often blow the player/s off of the arena. During the battle, Vallatus will use in combination, homing tornados & cyclonic breath to try to defeat the player. However there are walls that absorb Vallatus' Cyclonic Breath and are the main method for the player to reach Vallatus.

As the battle progresses, walls begin to disappear and after being hit twice, Vallatus makes the walls rotate on circles forcing the player to keep on their feet. 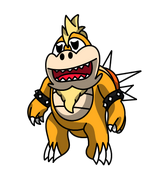