Vaati is a recurring villain from The Legend of Zelda series. He first appears as the main antagonist of The Legend of Zelda: The Minish Cap and later Four Swords Adventures. Vaati was a Minish wizard obsessed with dark magic, but was consumed by the power he studied and transformed himself into a demon. After wreaking havoc on Hyrule, he was sealed within the Four Sword.

The only way to take over the Mushroom World is to kill Mario, Luigi, and Peach. He dresses up as royalty, Sallmor. He takes the REAL Sallmor, and kills him. Vaati has all the guests for a party- but then destroys the castle, and takes the people that still survive. Two of them are Mario and Luigi. Peach however, was late to the party. She wasn't near the horrible incident. Peach then goes on an adventures, to see if she can revive the Mario brothers.

When Peach finally met up with Vaati, Peach took the courage to defeat Vaati, who is now a giant Eyeball Bat. Vaati was weakened by the Crystal Hearts, which made Peach's battle easy. However, Vaati would not accept defeat. He attacked the Crystal Hearts, and they all split in two during the battle, disabling Peach's special attacks. Vaati thought that he would win- however, he was still defeated by Peach, even without special powers. Upon defeat, Vaati faded away, into the wind, dead.

Vaati makes a shocking appearance as a playable character in Super Smash Bros. Blue Heat. He is only playable as a regular Hylian, but his Final Smash lets him turn into his true form. In the Story Mode, Vaati does not create any alliances, but he does prove to be somewhat worthy to Ganondorf.

Vaati appears as a boss in Nintendo Stars:The Beginning. He is the second boss of Chapter 18. Following the events of Paper Princess Peach, he was somehow brought back to life by Ganondorf.

In Kingdom Hearts Decade, Vaati is in The Organzination of K.A.M.E.N., and is known as Kamen Rider Kabuto. He is sent out to kill Sora (Kamen Rider Decade). He also tries to kill Riku (Kamen Rider Kuuga) and King Mickey (Kamen Rider Diend), but when Vaati had too much power in combat, he was sent to the headquarters to get less power. When he came back for revenge, he fought hard, and Dark Kiva destroyed the helmet. Captain Blackeye kills him by using his hands. Kamen Rider Kabuto may been down, but the fight of Kamen Rider continues. He was sent to God's Evil Hell.

Vaati appears in his Hylian form in Captain N: The Game Master as a servant under Mother Brain, however, he serves underneath her for his own gain. He hopes to take over Hyrule, and plans to execute his revenge and to prove himself as the legitimate villain that he is or rather claims to be. His strong wind mage magic and intelligence puts him at an odds with his partner King K. Rool.

The Legend of Zelda: Dark Legacy

This game's version of Dark Link is hinted at having been created by yanking a portion of Vaati's dark soul and instilling it into a corporeal body. The game covers the redemption or continued fall of this portion. 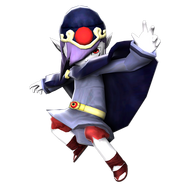 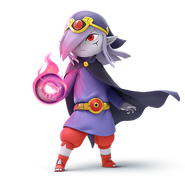