Wanted to apologize for getting back to you so late. I'm usually better than this, but my mental and physical health has not been the greatest and this is the first window in a long time where I haven't been dragging an metaphorical anvil. Moving along though, yes, Agate can be in the New Fantendoverse. Apologies for the long wait on the reply.

You have a discord? 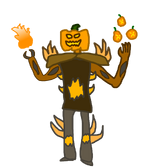 Back in the 60s, failed experiments have led to extraterrestrial dna ending up in the gene pool. It spread throughout the city of Agate, the first of the Enhanced unveiling themselves in the 2000s. Granted the power, they chose to serve their own ends in order to get what they like, tearing the police force apart and forcing the governing powers in their pocket. And now, the Enhanced are left to fight for leadership amongst themselves, and among them is Jack O Lantern, manipulator of fire.

In battle, Jack O Lantern is a glass cannon, boasting low defenses though wielding some pretty big damage and speed. He can rush in towards foes, and conjure up spell flames with which he covers up quite a bit of damage, and can utilize his smash attacks (which utilize a morning star-styled pumpkin) to beat them away! Utilize his speed and flames to distance foes before swooping in to finish them off.

Re: World of Animals

Yeah, I think this could work out! You have anyone/thing in mind for your roster/map list?

I'd like to report User:Iggyfan111 for flaming on various pages, including Mario Kart 9 (erictom333), Peachette, Mario Kart Something, and my and User:CrakaboLazy4090's talk pages, all about removing Peachette from my Mario Kart game for no reason other than his own hatred of the character.

Thanks for removing to me, friend!

I've been putting the "{{SpeedyRewrite|No Content}}" something by mistake at the Lip page, and as for the rest of the page about all other girls, the fairies from "Panel de Pon", so I can at least show an examples as of my favorite water fairies, however fire that is my favorite element of nature, look at them then:

These are the fairies made up by "WAリでし" one, you know, from Japanese, about "リでし", the pronounce is "rideshi", in this case, he/she could be actually "Warideshi" (Sometimes, but possibly, "Waridesi"), he/she who shows up about the characters, beyond I translating but in a "strange" way, I think, if you folks want to correct the names, changing them to the new, better and/or correct ones, then change them if these are wrong that I give, e.g. the name "リエル" (Rieru) is translated to "Liel" correctly, but about the name "リオラ" (Riora), if this name that some of you who believe that is "wrong" being translated as "Riola", how about for example "Liora" or also "Liola"?! Whatever the name could/should be to the "fairy of darkness", who is born in the "Dark World" (of course, the same world where various monsters and/or other mysterious and/or dark creatures like/unlike her), I who was naming her when translating, but beginning with "R" that is for "right", "Riola" as for example like that, as Lip that begins with "L" that is for "left" (of course, the opposite from "right", but literally), even both Lip and Riola being equal ones, imagine if Riola saying to Lip the same thing, but for example as Shadow the Hedgehog says to Sonic the Hedgehog, like "we do look alike", in this case the fairy of darkness says to the fairy of flowers that they look like each other as the hedgehog says to another hedgehog that they look like each other, since Sonic X, at the episode 34 called Shadow Knows, when Sonic and Shadow meet themselves. And as for these pages there, about the pages you have put the same thing before, but each one, this is it.