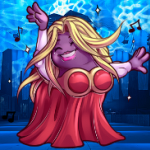 Hi Eva! I noticed that you been doing some wonderful edits to fanon koopalings! I really like the amount of work you put in, and I was wondering if you could do a favor for me. If you were not aware, a character that I created for F-Zero U came under fire after I posted a Brawl Hack that I used for her design mainly because it looked like a completely sexualized female Mario. I listened to the complaints, and did some arguing about it, but the others eventually won! Anyways, I tried to edit the render to be more in line with Nintendo Standards.... but needless to say.... it was a trainwreck.... So I was wondering if you could edit the render to be more appropriate, and I also figured since you were a girl yourself, that you could make her look attractive while remaining tasteful! So will you take me request? Please? I'm a kid with an afro... what else did you expect? (talk) 19:23, April 1, 2015 (UTC) P.S. Here's the render in question...

To be honest, it doesn't matter what you have to use to fix her up. I will accept any effort to make the character look tasteful in any way! I know you will do a great job, after all the most recent fanon Koopalings have never looked so much better! :) I'm a kid with an afro... what else did you expect? (talk) 21:53, April 1, 2015 (UTC)

Thank you very much, Eva! I love the design a lot! You know, I knew that it was a smart idea to let a girl redesign the character! Thanks so much! You did way better than I would have done myself, cheers! I'm a kid with an afro... what else did you expect? (talk) 16:33, April 2, 2015 (UTC)

I would like to do me one more favor. Since I'm a big fan of Jacksepticeye, I made a koopaling for him, but he's not in 3D. Would you make him in 3D. This is what he looks like (the one with the Mohawk)

Hello Team Eva, could you make me these seven koopalings (last seven) look a bit better? And if you have time, could you help me with this artwork (Thunderbird Mario)? Thanks

IDKIYWTDTON but check out these two games that I made while you were away (they are both on construction):

(By the way, don´t mind the Mona pic.

Come on skype. Happy birthday, for if I don't see you today or tomorrow.

come on skype more pls k thx Outside the government, beyond the police...

This just looks hilarious to me for some reason

HE DID IT!
Add a photo to this gallery

Where have you been lately... Come on skype more please. Outside the government, beyond the police...

Retrieved from "https://fantendo.fandom.com/wiki/User_talk:Team-Eva?oldid=1880441"
Community content is available under CC-BY-SA unless otherwise noted.