I unblocked your IP, but it might be a while before the unblock actually processes, so hang tight for a little bit. --SonicWiki (Talk)

Here is your Secret Santa gift, Blenda. I hope you are happy with the gift, because I based it on your Kirby Hat request for inspiration. Sorry for not getting the right color for the Pokemon. 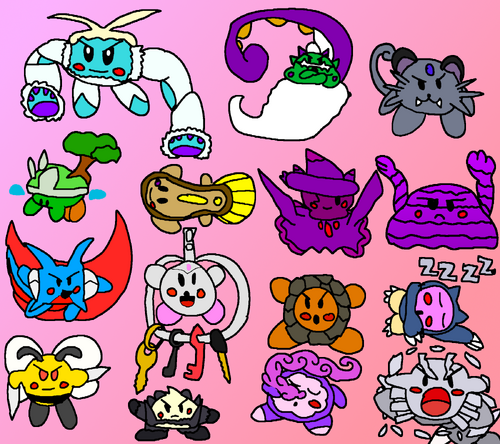 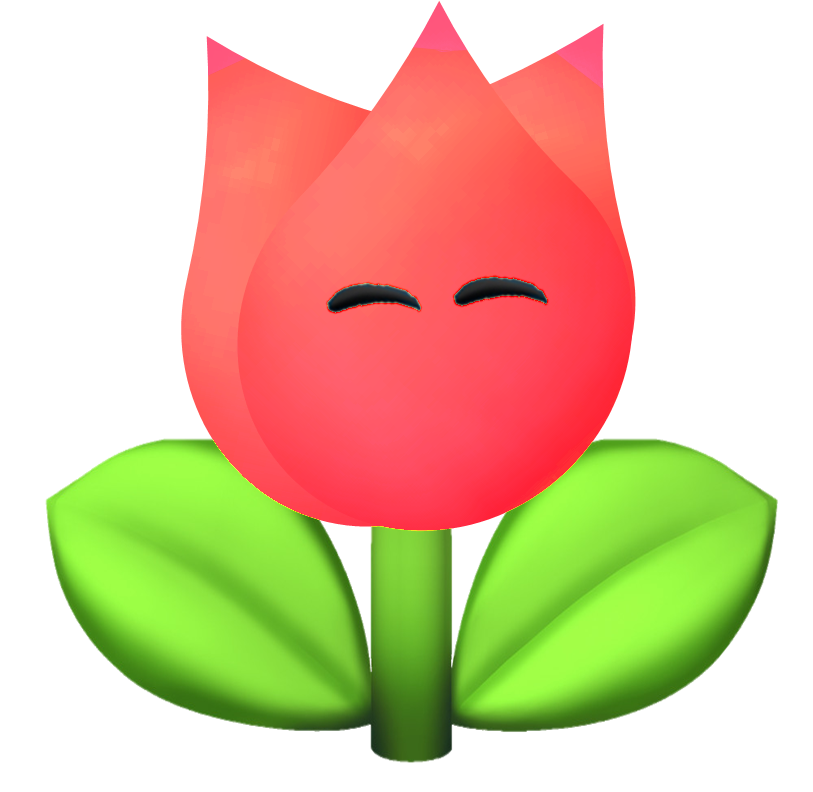 Can I make a spiritual successor of It's Really Just Mario Kart?

Hey, I've seen your Kirby logos and they look decent. Would it be OK if you did one for Kirby and the Hourglass Empire? I'll show the game off at the 10th anniversary showcase with the logo, so if you make it, let me know if I should give credit.

WAKE ME UP! (Wake me up inside)

I dont know when ill be able to get it done, sorry. I can provide you with the sketch if you want though.

Sorry it is taking so long but school takes priority

here's the sketch then, unfortunately im not able to color this until maybe tomorrrow.

I dont own snaily joe but i do kind of write for him, so i guess i would like a idea of what you're doing before you fully commit because it would be really awkward to have wildly different snaily joe stories supposedly running around in the same universe

Not to brag, but I got Simps to shout me out twice on today's stream and i have video proof i will in am SERIOUS

Do you want me to purge (most of) the comments section on Super Ashley Odyssey? I'm aware that you're not a huge fan of the continuous jokes made on the article and I'd be willing to help clean it up. The comments can be dug up via the deletion log if necessary.

I suggest putting {{CommentWarning}} at the top of the article; hopefully it does something to lessen the amount of dumbass Odyssey jokes.

I just wanted to apologise for posting the logs. I was mad at muffin for his blog and just wanted to try and dismantle his argument somehow. I ended up doing that in the stupidest way that hurted you as well. I didn't even consider the possibility of you being truthful when you left and for that all I can do is apologise.

I did it because it was too out of hand. But I don't want to point fingers. But as a thanks for your support. I will let you reboot it if you would like.

I like the title you gave the icon reboot

Is it alright with you if my Halloween showcase has 13 days? I haven't done anything info-related for a while now, and I've got a lot that I've been meaning to show off now that a lot of my projects have renewed development. I'm planning for 13 days, with the final day being on Halloween.

If not, that's fine, I just wanted to do some personal developer insights for my showcase, even if it was looked over by every person in the community.

Yeah, I'll admit 13 days is a lot, but I went with 13 because of all the projects I've got and mainly in theme of Friday the 13th. I'm gonna be trying to keep each day as Halloween-oriented as possible, so as to stay in the general theme. It won't be easy, but I've got a pretty good game plan.

Time is running out! Hurry and submit your moveset for Round 3!

About the Crossover Series Swap

Ok so I would sign up via comments but wiki is being dumb and won't let me comment so if it's ok with you I'll tell you my picks here.

Just posting this here in case you didn't see the blog but can i trade Terraria for Street Fighter?

Hey i don't think you'd be instrested but could i trade metal slug for street fighter? I have a cool idea on how i could use sf. and metal skug and scott prillgrim could work together for you. but in the end its your choice .scatteredreams (talk) 10:27, April 12, 2019 (UTC)

Can I help you work on the game?

Do you make sprites for Super Mario Maker Chi?

hey! just was wondering if you were ever going to add mre to yor splatoon 3 page?

That page is a joke page, and I add excellent grammers as a sense of humor.

Why did you give me that warning? These images are not too sexualised...

I see that you have just recently marked my page Mario Kart Super Star for plagraism. I don't know why you had marked that, as I didn't even think I was stealing off any other page on the wiki, and would like to discuss why you marked the page with what you did.

Question about the rules and getting banned N

Question about the rules and getting banned N

Okay, it possibly isn't in the rules, I will ask you instead. If I were to get banned from here would I have to hate it? If you don't understand what I mean here are a few examples:

There is a user named OtterLover123 and another user named RedDog88 Now: these two users are major fans and love coming to this wiki. One day you ban Otter for one month.

Does Otter have to ignore and pretend to hate the series for the whole month?.

You ban RedDog forever. Does Red have to force themselves to hate the franchise and possibly throw out or sell any related merchandise, toys,games etc.

Users that were mentioned do not exist to my knowledge, any similarities are coincidental and I take no responsibility

I hope i can make a better article.

I seriously can't get the hang of it. I moved the article to my sandbox. So, can you delete it?

Hey Stella, just Athena checking in for a brief moment to ask if I can have temporary admin rights or if some pages can become temporarily unprotected. I came back a few weeks ago to fix up some of my articles so they complied to Fantendo's revised standards, but while I was doing so, I ruined some of the grammatical formatting and I'd like to be able to fix up those articles once more (as well as do an even more thorough cleansing of content if I see more). If you're curious, I plan on revising Zinfestation and all three of its related story counterparts, BITTER💊SCARS, HEART💔PATCH, and FINAL✨CHAPTER. Please respond on my talk page as soon as possible so I can get right to work. Thank you!

Thank you! I'll let you know when I'm done

If I could have admin powers for up to five days (including my first 24 hours), that'd be delightful. Editing half of Zinfestation took about eight hours and I clearly need a lot more time (and sleep) to get to the rest of the articles. Thank you!

Thank you for helping me do the work I wanted to do Stella, I really appreciate it

I hope I won't get blocked again

I'm sorry for how I made Masafumi's personality in Persona 6: Runes and Men, and I hope I won't get blocked again because of "offensive content". As I said in the comment, I wanted to make a character who shares the idea of homosexuality Hans Bluher had, which is different from the modern view of same-sex relationships and thinks of them as an expression of virility and battle camaraderie. Tokoyami no Nietzsche (talk) 17:28, 20 April 2021 (UTC)

The Roundtable is happening at 3PM EST on July 26. If you're available at that time, it would be very helpful if you could RSVP to the link in the email! I attended one of these last month and I thought it was a good way to share your feedback about the UCP, UCX, or whatever else you want with the Community team.

I worked hard on it. Please unprotect it. IHeartBaconHairsAndJailbreak (talk) 19:55, 6 August 2021 (UTC)

Requesting my unban from the Fantendo Discord server.

Hey. It's me, Chillbrah2, otherwise known as Marisa. It's been around a year or so since I was banned from the Fantendo Discord server for intentional sockpuppeting. While I did only do it was a joke, I now realize that the things I said or made the others believe about my fake personality was incredibly hurtful to what I was pretending to be, which can harm real people. As such, I apologize for my actions.

Additionally, since it has been a year or two since it happen, I believe I have matured enough since then to request to be unbanned from the server. I 100% understand why you and the other Discord mods would refuse to do so, but again, over the year, a lot about me has changed as a person, and I believe I am mature and responsible enough to rejoin the server with a fresh start, as I am looking to make my reputation more positive here on Fantendo.

Hello, i'd like to report the user NovaScepter because he steals characters that me and other users here have created and keeps ripping off other users' content despite the several warnings given to him, even all the character articles he creates are COMPLETELY a copy-paste of articles from other wikias (not a fragment, not an small portion, the WHOLE article), i've corrected some of these articles (e.g. Juri Han) but he continues to do so.

If you can do something to stop this, i'd be very thankful. Thank you and have a nice day. ~TheProjectXZoneFan1997

NovaScepter: Well... i admit it, butplease don't do it. For now in forward, now i'll don't copypaste. Also i promise, no ripping off.

also can you deleted his game pages like Miracle World Battle Crusaders please? this page is nothing connecting my Page. also please Deleted whole Characters he created.....WikiaisSpy24 P.S. did he say true?

NovaScepter: Hello Stellie. Yeah... i learned the lesson of no more stealing content and plagiriazing, but, to be honest, i'm usibg fanon characters which are free to use... but i'm not here to talk about this theme... i'm here to unblock an user. It had been passed 1 year and 3 months after his indefinite block and i think that he deserves one more opportunity. Can you unblock Exotoro? Thanks

Re: Re: Unblock Request

I have reasons: 1. She didn't completed her developing games like Super Smash Bros Discord 2. I think that she learned to not use sexual behavior 3. WHY INDEFINITE TIME? At least you will ban her for 4 days

Hello, sorry about this but NovaScepter has stole something from my game ideas yet again, this time he stole the description of my Super Smash Bros. game idea for his Smash article; here is my description:

"Super Smash Bros. is a crossover game created and directed by TheProjectXZoneFan1997, the game itself is a reboot to the franchise.

Gameplay: The gameplay is still the same from the previous games."

And here's what he put on his game:

"Super Smash Bros. is a crossover game created and directed by NovaScepter, the game itself is a reboot to the franchise.

Gameplay: The gameplay is still the same from the previous games."

I don't know why is he still unbanned, i know he has apologized several times but he continues doing such things despite that. If you can solve this i'd thank you.

Thank you for blocking a (technical) molester!