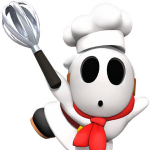 I found something awkward

There is a character that is a green Shy Guy like your character, Gary. He is also named Gary Guy......Strange....

Yes, I know he isnt yours. He resembles yours though and has a simmilar name.

Look, don't put pictures or make changes to my pages without my permission. That means you have to ask If you are allowed to do it. Ask me. I almost lost one of my favourite pictures. Joshuakoopa (talk) 17:55, September 16, 2013 (UTC)Joshuakoopa

We, the FF2015 Development Team, noticed that you signed up your original series, Charnelon the Blue Ninja, for the abandoned project Fantendo Funfair, but have not yet signed up for Fantendo Funfair 2015. We were wondering if we had permission to create an attraction based on your old submission for you, if you would not like to participate in FF2015. If you would not like us to create an attraction for you based on your old submission, that's alright. Just let us know on TechBreloom's talk page whether or not we have permission to create this attraction for you by August 16, 2015; if you do not reply by then, we will assume we do not have permission to create this attraction. You still have time to sign up if you were unaware about the new project; just leave your submission here! Thank you.

Yours truly, the FF2015 Development Team

Hey man, I saw the edit on your userpage. I just want you to know if there's something wrong you can always come to me to talk or whatever.

NO ONE HAS A HOPE AGAINST MY DAZZLING BULLWHIPPERY!

dude are you okay i might not know you to well but what happened? Jaipom (t∣b∣c)

Seriously what was wrong though
˜ AgentMuffin ”

never mind i saw
sounds like that really sucks man, glad you could get over it or w/e
˜ AgentMuffin ”

So I was wondering if you were cool with me using the SGY characters for a show: Big Shit Talk Time with Shy Guy Yellow. If you're not cool with it I'll delete it. Also, you can help write some episodes maybe? SuperSonicDarkness (talk) 20:45, November 27, 2015 (UTC)

That same Bomberman Icon is on the main page as well.

Retrieved from "https://fantendo.fandom.com/wiki/User_talk:Shy_guy_yellow?oldid=2386875"
Community content is available under CC-BY-SA unless otherwise noted.