I see nobody has done this yet. This was painstakingly hard to do on the tablet

We are here. Don't kick or ban me Guys!

The frog shall deal with these ideas. HE WILL LOVE THEM!!!!

This Greyscale Human is very slow, but very powerful and takes a whole load of paint to restore. Should be featured around the second world maybe?

This Greyscale Human is very ghostly, as it sometimes dissapears to the point where it's part visible. You can only hit it when it's not invisible at all.

This Greyscale Human has a lasso that can attack you from far range. You can color the lasso to make it dissapear.

These Greyscale Humen can be restored very easily, but are fast and are usually found in large, deadly, numbers.

This Greyscale Human loves to get all up in your face, as it has a sword for melee damage. But knights can also throw Greyscale Spears from afar.

These Greyscale bugs are the size of the average joe Greyscale Human, but these guys can trap you in Grey Webs. You need to mash shoot to restore the webs to break free.

This Greyscale Human can dig underground, and then pop out right under you. You need quick reflexes to avoid them.

This Greyscale Human does not move. But it has a 360 Degrees shield, and only puts it down to attack.

This Greyscale Human is part human part horse. It's so energetic it will try to ram into you the second he see's you.

This Greyscale Human has a cannon. The cannon will shoot in the air and eventually you will have raining cannonballs on top of you. After you restore the cannon, the Greyscale Human will act like your average joe again.

Are you going to Callob with me, for Five nights at mojang?

Ye, i'm still just trying to come up with ideas 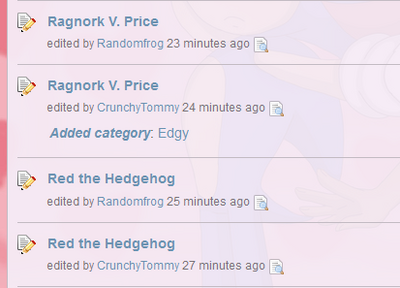 if there's more people involved with the vandalism of these wikis, please notify me.

i just wasted 5 seconds of your life

For the next community draw, can you do Flip?

Could ye make a community draw thing for Nutik? I'll put a little reference art in case necessary. I'd appreciate it :3

I imagine you've probably got the next few Community Draws planned out but may I request that we have a Fanonmon community draw, so everyone creates their own Pokemon, just a suggestion. Shadow Inferno (talk) 01:02, April 1, 2015 (UTC)

Hey, me and scratch are on the server fixing his mansion, if you would like, you can help us but yeah!

WE HAVE BEEN WAITING SO LONG FOR U TO COME ON, GET BACK ON MINECRAFT

Sure. I deleated his page because I no longer wanted anything to do with him. Go crazy.

I still have partial rights to Mika Sho, right? I might do some stuff with her on the sidelines, and I plan to feature her in Destinies. Drackula (talk) 08:48, December 20, 2015 (UTC)

Hey it's been a while since I talked with ya hasn't it? Anyways, I am planning to repair the  Disney's Magic Kingdom Combat page we planned alot for but instantly forgot about in a week. Anyways message me on my talk page if you want to talk more about the game. Thanks!

Hey, sorry if my previous message sounded spammy. Anyways, shall we work on Disney's Magic Kingdom Combat like we planned? Please reply asap

-My Favorite Word is Pineapple (t∣b∣c)

K sounds good mate, I'll update some stuff on the game soon thanks for replying!

Hey Random, I have no idea if you're still around, but are you okay with me rebooting the community draws?  I miss those around and I'm pretty sure several people do, and so many of us have gotten better in artstyle, I think it'd be worth a shot.

Just to remember, I'm not a niceperson sock.

Hey froggo! Yes, you may add Awesome Austin in yoiur game! Although you might get hate for that, but you can add him if you want!

I think you know who I am

Hey Frog, I was wondering if I could have Gasparo back.

ALL HAIL THE FLAME KING!!!

If you don't reply soon I'll take it as a yes

Re: Art is Dead

As long as you do something about the formatting of these pages...

💀 ♪♫♬ their money tips her scales again, make your deal · just what is truth? i cannot tell, cannot feel ♪♫♬ 💀

Basically, in my TSSES's timeline, Weaselton would have flourished into a full on city, but society would have fallen apart due to lack of food, with weasels becoming full-on bandits with Mr Iguana as the leader. The city gets flooded by the end of the episode. Let me know if there are any problems.