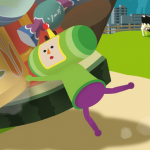 About the Chloe Koopa joke

is it okay if I use an automatic rewriter to rewrite the page? I'm not at all good at putting things in my own words

yo get your butt on chat

we gotta discuss the roster evo thing, my dude

The pact is sealed

Where did you get that transparent Lori Loud picture (the one called LOUDHOUSELoriRender)? Just wondering... YA-HOOO! 23:00, October 9, 2017 (UTC)

The loudest fans are at times the most toxic fans, and that's unfortunately how it ends up sometimes, even though the toxic parts of a fanbase tend to be a minority in most cases. And that toxicity is usually why many fanbases have received so much notoriety, for a lot of people open their mouths way too wide and spread their dirt on every weird thing they see. But what a lot of people fail to recognize is that if you look past the toxicity of a fanbase, you can find pleasant and charming people in there that are nothing but passionate, gentle fans of what they like.

Sonic the Hedgehog, for example, has a very notable "toxic" side to its fanbase, but does that mean it's all bad!? No!! We got the passion project Sonic Mania and there are many great Sonic ROM hacks or Sonic fan games out there, and you have nibroc-rock who's made a good portion of amazing 3D Sonic renders. And if you want, that's the side of the fanbase you can choose to align with, because it is there and it is existent and it is flourishing with life! Or you can choose to remain standalone and like something without caring about what anyone else thinks!

Don't let any site -- especially as something as notorious and god-awful as thetoptens.com where the users are in full control of what's voted -- change your perspective on what you like, because ultimately your feelings about something is what actually matters in the end. Who cares if your cartoons are on a "toxic fanbase spectrum" built by losers that have nothing really important to do in life? I haven't quit this site just because we apparently have one of the worst communities on the Internet (note: voted on by just five people) because I only care about what I think!

Don't feel guilty for liking something that a great many people diss on (they're also just a vocal minority on the Internet), you don't have to feel bad for liking something especially if there's nothing bad to actually feel about. Just because you're a fan of something doesn't mean you're automatically considered part of the worst bits of its fanbase, you can just ignore the fanbase entirely and live off your own free wills and observations without letting anyone else do your thinking for you. Alright?

You are in control of what you like and don't like, and you shouldn't let anyone else slant your emotions for the worse. Your opinions should be self-driven. Good luck :>

💀 ♪♫♬ yeah, haven't i seen you here before? · have your heroes disappeared? ♪♫♬ 💀

Mm... I would need to see your outline first, but I'm not entirely opposed to the idea.

basically all the notes i have are as follows:

i dunno about a couple of those elements, namely because i dont know what they have to do with the story of the mysterious five organization or for that matter, why it's entirely necessary to kill someone off

the focus on wario, rozalin, kylo ren, star butterfly would be great if we didnt already have a plot focusing on Emmett, Dexter, Inori, Chuck, and Iron Man, with a subplot focusing on a amnesiac Junko tagging along with them. as you've described it now, that's four extra subplots with very little to do with the actual plot. now we've had stuff in these plots before but they tended to fold back into the main story, to the service of the main plot. as such, i find it kind of disjointed for a approach and you won't even elaborate on what kylo ren is supposed to be doing. "the last jedi" isn't really telling me anything, as much as i love that movie and the mysterious x project series isn't about retelling character arcs. that's more of a fighters of lapis thing.

as for killing someone off- i don't get it, to be frank. seems wholly, completely, unnecessary. we did the inori fake out last time, we did a bunch of fake outs last time. i dont think anyone has actually died in the MXP universe, it wouldn't make any sense. it'd be like if the toys in toy story had to deal with deaths of toys. to me, deaths are cheap if it's done for shock value or for the sole purpose of "re-banding" the team. you can do that with a fake death, we did that last time. you gotta either elaborate on that or just drop it from the treatment.

i dunno, i just honestly feel like a lot of what's going on in this treatment misses the point a little of what we did in past stories. not that they were high-caliber writing, but there was more to it than just "disconnected subplots", because those acted as pieces to a puzzle for a mostly coherent story. and stakes like death just aren't really mxp's thing. the moment we set it up as children playing with toys, i feel that was the tone we should stick with.

Well, thank you for taking the criticism pretty well. the only thing i would suggest is probably changing kylo's motivation; if anything he would want to disrupt the natural order of things; "kill the past" so to speak. keeping him on his own side is pretty much exactly what i would have suggested so good work there.

I just remembered that me and pablo wanted to end the series pretty much where it began, with inori and chuck just sitting on a couch, eating pizza until the next disaster strikes (the beginning of m5p, basically)

I recently claimed your page Calvinball and I just wanted to ask if I can continue work on this, but add my own items to it. Is this fine with you?

I am not at all sure why you felt the need for apologizing when, in retrospect, my comment does seem to have that "nah you're wrong" attitude. Props to you liking that show, I just can't bring myself care about it (or a lot of other animated shows that people are really all excited for). I'm not exactly the best at voicing my opinions too, as you've probably seen, so we're both in the same boat. And sorry if I came across as rude. Mirai Moon  23:00, April 10, 2018 (UTC)

so cute!!!! thank uuuu, so sorry for the late response, i think you did the design justice <3

💀 ♪♫♬ yeah, haven't i seen you here before? · have your heroes disappeared? ♪♫♬ 💀

Hello! As a former participant of the Roster Evolution, I would like you to vote for the final round of the game as to decide who should win it!

Thanks for your cooperation.

...did you get Arend's permission to rechristen your version of Lavora as the "modern" version?

I tried making a logo.

What do you think?

Here you go. 2 different versions. 1 with a white shadow and one with a grey shadow that makes it look 3d. I would use the grey one. My only rule is you have to credit me.

It has been done.

today I found out your version of the Sonic Forces game(the Exalian Cut) has been deleted. any reasons why?

Retrieved from "https://fantendo.fandom.com/wiki/User_talk:MeGa_eXal?oldid=2768365"
Community content is available under CC-BY-SA unless otherwise noted.