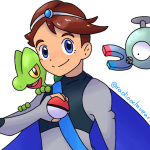 aka the Mirror Samurai

Hello. This is the sixth iteration of my talk page. Please refrain from swearing, Cyberbullying and insults while on this page. Thank you.

I fought this one guy once who had all reclassed level 40’s...... whelp. That one was fun.

My personal quest is to somehow assemble the entire cast of Birthright through winning My castle battles and I almost got an Anna one time. Best thing I have is a level 33 great lord Caeldori which i’m 99% sure was a setup because she has dark blue hair

Lucky! I got mine with just Conquest. Also, the code doesn’t seem to be working, can you check it to make sure it’s fine?

I got the wrong guy, wanna try quarter till?

I gun lose this one, he’s got a Camilla, a Leo, and a Xander with replicate

Okay, here’s what we’ll do. Give it till 10 after, then just put in my castle code and grab my card. It’ll be better than nothing.

Wait where are you located I’m U.S.

Hey, it's Hoola! I wanted to congratulate you on 10k edits!

Hello, Hoshidoan- Ehh, I got nothing.

Gonna be hard to insult me now I'mma getting Revelations today! So, uh, appropriate GIF:

Pretty sure its from the E-shop or the explore paths option, it downloads into the base game.

Cool! Playing as F!Corrin, I can't marry Felicia, but I want to marry Shura my next Conquest runthrough. (Takumi's on Rev, Silas on Conquest). I'm at Chapter 19, and am doing the 5-6 paralogues I have stacked up. I'm a Hoshido Noble.

My Nohr Noble Corrin is actually pretty good. I did her that way cause it would give me more stat boosts, and I could just get the NN skills from my other save.

Yeah, there should be more supports. I’m literally considering doing some crazy rewrite (kinda like this) and adding more supports.

I’mma be honest I used Sakura only once and then replaced her on my roster with better people. My best unit is myself, a level 11 Hoshido Noble, followed by Kaden (ninetails) and Ryoma. I’m on level 19.

Why am I doing this

So, I beat revelation! So now, I decided to do a rev no reset classic normal play through for fun.

Azura died in ch. 6 after I accidentally left her in the range of them wyvern riders, Jakob just died in 7 because RNGesus screwed me.

Yep, after beating chapter 10 the only survivors are Me, Jakob, Sakura, and Hayato. Subaki got destroyed on a 30% hit chance.

If I manage to not have to change to casual just so I can get through, it will be a sad credits section...

Thanks! She is Caucasian and she has blond hair. Her t-shirt is light yellow and bluish (maybe cerulean). Her pants are like yoga pants, they are black. And finally her shoes are white. SO she is pretty colorful. Also, I know you draw on paper (which is totally great). So I might have a transparent image be made, I just wanted to let you know so that you wouldn't be offended.

Edit: Make the glasses any color you want.

Thanks! She looks good. Honestly, I cannot draw at all, so any drawing looks good to me. I think you're drawing style is the most unique, and I like that. Thanks again! (Also gonna have computerboy make a transparent version fyi)

The Camilla Thing makes no sense.

That’s why I always marry her off....

Currently I’m running a maximize skills run. I can post a picture of my insane pages of class running if you want...

Also I’m getting BR soon so Scarlet! (And Yukimura but screw him no one likes Yukimura)

How did you reclass Azura in Rev? I made her a Kinshi Knight because Hinoka was my Falcon. In my new run she’s a priest(beast)ess from Sakura.

Also I finally nabbed a Scarlet from someone. though really it don’t matter now i’m getting BR soon...

Kinshi is way better than Falcon for Azura, she’s easily better than Reina (most of the time, if you train her up early).

Hello i AM out of prison and i have learned about my mistakes and locked up for 3 years for Breaking a deputys nose and running away and resisting arrest and i AM changed. By the Bible and relirock and the spirit of Jesus Christ washed my sins away and my worries are gone and returing to home

I’m gonna be honest, it’s really weird not having Leo to just tank everyone. Or have any of the other units I usually have. Also, it’s really easy. Compared to Conquest at least. at least my second husband save file deleted is there, but I paired him off with Azura --DarkSpark83 (talk) 21:36, April 23, 2019 (UTC)

Sure! That would be very helpful! Do you have Discord so we can hash out the ideas?

Hey Kirbi! Your welcome for the compliment. I've always been interested in setting up a DM with you on discord, but you can't send a message to me, as I use an unclaimed account. I can begin a DM with you, and we can chat. I'll set one up as soon as you're ready!

Flore, the younger sister of the lord of Amaranthus, the sole northwestern kingdom still standing in the wake of conqueror Seaiga. Alongside her brother, she works to stave off the invading forces with the assistance of resistance group Chrysanthemum. Throughout, they learn more and more about the mysterious items around them, from the floral shape in Flore's eye, to the Fire Emblem that could bring ruin in the wrong hands.

Upon entering, Flore arrives dressed like a Sage, a tome of light in her hand as she floats down on into the arena. She's purely a magic wielder here, which translates to her being floaty, slow, but able to attack long-range with her spells. Attacks tend to consist of wisps of light flicking from her tome into appropriate directions, from a flurry of beams whipping before her for a jab, to bending in appropriate directions with tilts. An F-Smash has the beam punch forwards, a U-Smash produces a beam that launches high upwards with high coverage and low damage, and a D-Smash has her aim her tome before sending a beam down at her feet, it seeming to stamp whoever's too close. Aside from that, her aerials consist of more whips of the light, the light forming a whipping cone with a U-Air and swirling around her for an N-Air. Meanwhile, the beam seems to explode like a geyser in the F-Air and B-Air. She prefers range on her foes, utilizing her spells to strike foes. Utilize the range to wear them down from afar, before using the B-Air, F-Air, or Smashes to finish foes off.

Hey Kirbi! Can I use the name "Spectral Flowers of the Illusionary Winter" for End of Time? It will be the name of a music band in the game in reference to one of the sickest project name in Fantendo haha You will be credited of course :)

And by the way, where this name comes from?

Retrieved from "https://fantendo.fandom.com/wiki/User_talk:KirbiMiroir?oldid=3229951"
Community content is available under CC-BY-SA unless otherwise noted.