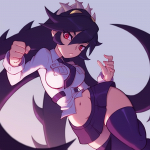 aka That cute n lovable gremlin

Archive can be found here.

I don't really tell you how much I appreciate you, so here I am right now- you're a great friend and I'd love to get closer.

(Fantendo's not letting me paste an image here unfortunately)

A wicked creature from Bloodlands in the Spectroverse, Phendropteryxes are giant monsters that scour the land for food. They gobble various plants and herbivores, and typically do so violently. On top of that, it seems capable of contorting its body into various destructive forms to decimate unfortunate individuals. These creatures are dangerous fiends that make the Bloodlands all the more terrifying.

Upon entering a smash fight, the beast flies in from off screen as its spike-shaped extremities shape into feet before touching down. Some may argue that the beast is too big for Smash, but it's been sized down to approximately Ridely-sized, it somewhat hunched over. The beast is fairly slow, very stocky and defensive, and has fairly dangerous moves with slow wind-ups. It also has 4 midair jumps. Smash attacks typically involve it shaking its wrecking ball-like head in the appropriate direction or swinging it in a circle around its feet, it also has a d-air that involves zipping downwards with its spike-like feet stretched down. Other attacks have it swipe its feet while stretching them into blades in the appropriate directions. It may be slow, but when it gets its claws on someone, there'll be Hell to pay.

I'm glad you enjoyed it!

Hi Scarlet / Redwing! I recently saw your profile and realized that you made a good logo, but can you give me permission to make an improved version of the logo?

one last question before UCP rolls in.

Retrieved from "https://fantendo.fandom.com/wiki/User_talk:Empress_Scarlet?oldid=3275442"
Community content is available under CC-BY-SA unless otherwise noted.