I'm Mariothemovie btw, got a username change and things earlier but I'm not sure if you were around for that or not. :P

Anyway, I'm going to unban you from this place because I took a vote at chat and most people agreed that you should be unbanned.

Everyone voted at chat, and it's been a fairly long time at this point, sooo. –seacastles

We did it in the morning yesterday. –seacastles

Hey ACL, you propobly (dont know how to spell) dont know me, I'm new here, but please may I have permission to edit Fantendo Universe? I want to add my character, Hugo ->

Hugo's not a bad guy, could he please be a playable?

Okay, I guess he can be on both? and his arch-enemy is called Trysparrow, he's at the bottom of this line 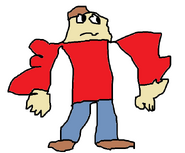 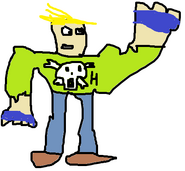 Yeah I don't really visit Wiki's in general anymore. I just spend time on schoolwork and my internet friends from my YouTube channel nowadays, yet nevertheless - fire away, and it's good to still see that you're around! Stelios7

Sure go for it, all my stuff is free use now. Although I never really made that public! XD

Thanks for watching some btw, nice speaking with you.

Now that Locky is gone, I need a new partner for Burning Spirits. Do you want to join in?

You said: how did you make that boxart?

I made with PowerPoint with Paint.NET too.

Don't hurt yourself man.  Just because you're mean sometimes doesn't mean you're a loser.  Look at the guy in front of you, me.  I used to be a heck of a lot worse in real life, throwing chairs on buildings and avoiding my schoolwork.  it took years but then I turned into a better guy.  If you think you're terrible then you should know that there are people that are a heck of a lot worse.  It's the meds.  It's the temper.  Don't let it go to  your head.

If you're wondering, you're not a loser and you're not always mean.  You wouldn't have made Fantendo Twisted or Universe if you were really all that mean.  Just because you occasionally lose your cool doesn't mean you're a bad person.  And who cares if you socked?  Those days are over, they should only be mentioned when you're proving a point.  Like insulting another guy for socking.  But if you think that your socking was bad, think about TNG and his socks.

I've met several worse people.  Have you called anyone gay?  I highly doubt it.  Have you deleted the content of many pages?  I doubt that.  (those rewards go to IMac and DyBowser by the way) You're much better off than a lot of noobs and IPs that exist on here.  You're actually not bad at all.  In fact you're great, to me anyway.  Stand up and rise again, try, try again.  Never give up.

Wow thanks a ton man :D Unfortunately the blargg fan club is kinda dead 'cause for whatever reason spark deleted it, but I appreciate it anyway. Will add it to my userbox tower but not right now, feeling lazy.

You seem to have a dislike towards foaleaf

May I ask why

Sure why the hell not.

Why I Use your Template Ideas

I'm inspired by your templates and I like testing them out to advance my ability as a user.  I know that sounds dumb but I try combining templates now and then to test my ideas.  Hope you don't mind ^_^

I formally accept your invitation.

Retrieved from "https://fantendo.fandom.com/wiki/User_talk:Animal_Crossing_Leader?oldid=3011619"
Community content is available under CC-BY-SA unless otherwise noted.