Hello everyone! As the title says, it's my wikiversary, i have "been" here for already 6 years (the funniest thing is that some of you, mostly new users may not know me :P).

This game is an adventure-action game in which the player will control Hunter, the protagonist of this story. Hunter will start facing several enemies that are commanded by the Totem Spirits. These Totem Spirits are oddities that represent gods, demons or simple spirits that are represented by animals. Actually, these Totem Spirits cannot appear in their own physical body and they need to possess humans that are having problems.

Hunter has some special abilities that allow them fight oddities or calm them. Some of them will be defeated and some others will learn how to live peacefully with the human that they are controlling. Hunter will be also helped by some of the oddities that are saved by them.

Let me show you one of the oddities: the Bear, Ursus, he is one of the friends of Hunter. He started to see a white bear through the woods of the village and sometimes, dead wolves and other bears appeared. But when Hunter comes into the woods, he cannot find nothing but an increasing number of bears. Soon, he will notice that their friend Ursus is going every night to the wood and fights these animals to kill and eat them, but bears actually protect him. Hunter must investigate why their friend do that and try to stop him, although this mystery will be the beginning of a series of mysteries that will cause many problems through the world.

Past can be changed from a unstable present. Ainhoa discovered his power to control time and the Green Shadow Bracelet, Erik and Oculus trained her to come back in time to kill Jessica before having contact with Aingeru. The reason to avoid Aingeru to be the Green Golden Braceelt is why she has to kill her. Ainhoa will learn to open the Gates of Chrona to travel through the Sea of Time to come back to the past. Once she gets her mission complete she travels back, but something has changed... 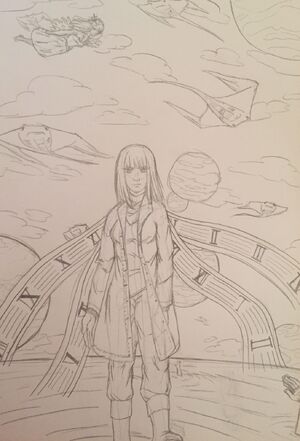 Ainhoa will find two friends that are loyal to the Empress, Pablo and Bruno will be now enemies with a giant power. The question is what happened to Aingeru. Isn't he the Green Golden Bracelet anymore? Who is he right now?

Retrieved from "https://fantendo.fandom.com/wiki/User_blog:Yami_no_Tenshi/Wikiversary_and_announcements?oldid=2445347"
Community content is available under CC-BY-SA unless otherwise noted.