I kind of feel that for most of you I'm like an unknown spirit because you've never seen me before around here. Maybe because I have been missing for a few years, time flies hahaha!

To the people who have joined this messy universe before my vanishing: I have been user for almost 9 year, although my activity decreased to zero a few years ago, partially because of motivation and because I had to start college, I finished college and nowaday I'm an expert in whatever I'm an expert (if there is something in what I am). My activity at this page was mostly my main series, Battle of Bracelets. If you surf on the fossile pages that flood Fantendo, you may have found some of these pages, maybe some of their characters, maybe some of the games I've written here. The main point of this blog is announcing that, for some reason, I decided to come back. I don't know how long I will keep developing stuff here, meanwhile I hope to enjoy making stuff and I hope you enjoy my content!

After announcing my return, let me announce the new things I have been preparing...

Previously announced as Project Bracelets Pre4, Battle of Bracelets: Unlimited Tales is a main timeline game from the series but is not a one-story game anymore. After the battle in the Hades, the Golden Bracelets decide to train, since they feel their abilities are not enough powerful to protect the world against darkness. Besides some events have been happening in background and the most disastrous prophecies have been listened lately. A Goddess of the Darkness left her cage in the Hades and our protagonists are now bound to face a dark future...

Aingeru, Ainhoa, Pablo and their friends decided to train alone or in groups to improve their skills, although their training are just the beginning of a series of stories that will change their future. Aingeru, followed by Elena, decided to train with Night, who previously offered him to develop his darkness powers that remain hidden. Ainhoa started a journey to learn about her origin and the explanation to her time control. Xander and Rachel chose to find a successor since they do not feel enough ready to fight greater hazards. Nastacia chose Kida as the new Pink Bracelet and they will train to protect humanity from the Gods of Light and Darkness and their whim. Pablo will investigate about the legend of Titans and why he can communicate with them... 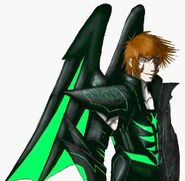 Those stories run in parallel and are the origin of future games, but other side stories will be added in the future. Today, we are going to announce two new stories, one of them based on Aingeru's inside and the other one based on Ainhoa's family: 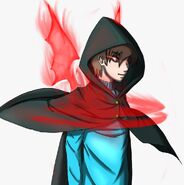 Aingeru as a child in Wrath state

Ghost Mother, Rancorous Phantom
Add a photo to this gallery
Ainhoa suddenly woke up in an almost empty world. She started walking through that place, it was somehow familiar for her, lacks color but she felt that this place was visited by her before. She noticed that the area was not as empty as she had thought firstly, it was a village with no people on the streets. Actually, she felt that there were no people nor any other being there. Suddenly, she found a child who was moving aimlessly through that space. When she approached him, she realized who this child was...

Ainhoa's mission is leaving this space and understand what is happening. She will learn about Aingeru's feelings, his past and will help him to fight his inner demons. The main problem will be her nemesis, Sync, who will cause trouble to the heroine and will understand that the power of Sync is out of her understanding. Fortunately, the spirits who protect Aingeru will be the most important allies of Ainhoa. This adventure will make Ainhoa stronger and will free Aingeru from their emotional chains. You will be able to find new items, new weapons and unlock new characters for future stories.

Asier, Second in Time
Add a photo to this gallery

After learning about her time powers, Ainhoa will meet someone who was left in the past. Her father, Aimar, is the Greatest Chronist of the Republic of Melia and one of the most important men of the country. He has been never proud of his daughter and never thought about teaching her about chronism. He always stated that women could not be chronists and it could not be changed. Aimar was a kind of spirit that appeared very few times in her life, he was always busy and travelling around the world... All these things made some kind of sense before, but the next time that Ainhoa meets her father, she will find out that her father is looking after a younger girl who wears the official robe of chronists. The reason why Ainhoa could not be chronist was a lie, and a misterious girl was the apprentice of her father. This girl will act very strangely to Ainhoa, probably this girl is not as inoccent as she could look, maybe it is time to research about the past of this girl.

Ainhoa cannot trust in her father or Mara, all these lies hide something big. Her mission is discovering her father cloudy business and the real identity of the girl. It is the moment to become a true chronist and demonstrate her father that he was wrong, and who is better chronist. You will be able to meet new characters and many of the people who are part of the Order of Chronists of the Republic and have access to new weapons.

I hope you've enjoyed all the information. Stay tuned for more information about Unlimited Tales. See you next time!

Retrieved from "https://fantendo.fandom.com/wiki/User_blog:Yami_no_Tenshi/An_impulsive_return_%26_Battle_of_Bracelets_Talks_-_January_2020?oldid=3125012"
Community content is available under CC-BY-SA unless otherwise noted.