Hello everyone! After taking a break from Smash Unbounded for a bit, I've recently gotten back to work on the game! In case you haven't seen it yet, the bestiary for the game was just released today (albeit in an incomplete state), so go check that out in case you haven't already; I'll be working more on it throughout the coming days!

The last of these leads us to...

Here are some release dates for most of the remaining DLC fighters.

As for the Player's Choice pass... Well, I can't disclose much about that at the moment. I can disclose one last thing, though...

The trailer opens in a white void, which suddenly gains orange splatters as an Inkling girl runs past, firing her weapon at a blue Inkling boy. Yep, it’s a good ol’ fashioned Turf War, just like the ones that unveiled Splatoon and Smash Ultimate to the world! This time, though, the two Inklings are joined by some guests as their battle continues; The Splatoon 2 Inkling designs, the Octolings, the Agents of the Squidbeak Splatoon… Heck, even Gary joins the battle near the end!

However, this battle can only have one winner, as shown when one of the squid/octo kids’ attacks is blocked by a… yo-yo?!? As all the fighters turn towards the yo-yo’s owner, they flip their hair as they smugly smirk at their competition… 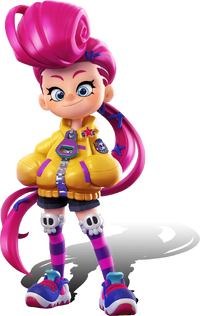 Berecca Sticks It To 'Em!

That’s right - Kicking off Fighter’s Pass 2 is Berecca from Ninjala! While her game may be similar to Splatoon, her fighting style is much different thanks to her trusty Ninja Gum! Using yo-yos, hammers, and all sorts of tools, she can adapt to any situation!

Expect Berecca and her stage, WNA Academy, to join Smash Unbounded this Wednesday! In addition, in case you missed the official reveal on the Fantendo Discord, Paper Mario will also be joining the game as a Solo Fighter! Expect his moveset to come out... today!

Retrieved from "https://fantendo.fandom.com/wiki/User_blog:TheFazDude/Smash_Unbounded_Dev_Update_-_7.6.20?oldid=3248979"
Community content is available under CC-BY-SA unless otherwise noted.