I've been working on Custom Nintendo Character Sprites and I just wanted to get your opinions on the first one. It's Little Mac from Punch Out! I might use some of these sprites for future games.

I only have Mac's standing position right now, but currently I am working on his jabbing and star uppercut poses. Also, he's supposed to look like he came straight from a Game Boy Advance game. I'll be working on other lesser known Nintendo characters soon and the rest of Mac's poses. Please tell me what you think.

Again I've made another Nintendo Character Sprite, but before you think I made it completley, credit goes to SilverBolt for making the face of Mr. Resetti to help me out. Anyway, I made Mr. Resetti Sprite with his full body instead of just his head. I was looking around the Spriters Resource for Animal Crossing sprites and I needed a Mr. Resseti sprite with him walking. However, I only found sprites for his head and decided to make the body of him myself. Again, thanks SilverBolt for making the face. I might get a full sprite sheet of Mr. Resetti's Body done before Little Mac's full sprite sheet because the base is easier. Anyway for the original sprite sheet, just look at the picture below.

(I'm not trying to do all the Brawl Assist Trophy's, it's just a coincidence.) 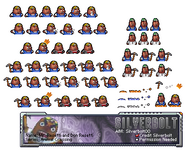