And now we really get things heating up in this episode, as we move on to the Fire type! 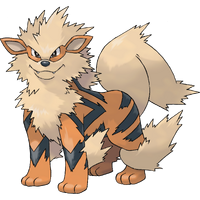 Let's Go, HeartGold, Crystal, even ORAS on occasion - when it comes to Fire-types you really can't do much better than Arcanine; it's a fast mixed sweeper, learns a good variety of moves, has Intimidate for an ability even when starting off as a Growlithe, is a ride Pokemon in Let's Go - hell, the only reason I didn't use it in Sword/Shield was because I had my eye on another awesome dog. But if you don't want to use the Pokemon I mentioned (for what reason, I dunno), Arcanine's always a good choice. 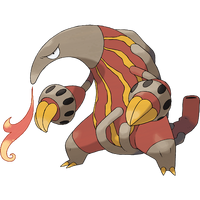 Out of all the Pokemon that could have made the cut, this mediocre piece of work made it into the Galar Dex? There is literally nothing special about this thing, and I don't exactly think "anteater" when I think of the UK, but whatever. At least its move Fire Lash got spread to Salazzle and Centiskorch in Gen 8.

Retrieved from "https://fantendo.fandom.com/wiki/User_blog:Darth_Phazon/Pok%C3%A9mon_Type_Faves_(S3)_Episode_3:_Fire?oldid=3097692"
Community content is available under CC-BY-SA unless otherwise noted.