I can't really make any good puns with Ghost-types, since they don't have the life of some other types, but whatever. 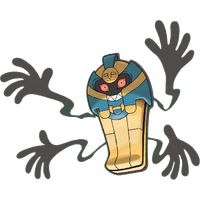 I don't know what the hell got into me, forgetting that Cofagrigus was my favorite Ghost-type; I love the hell out of this thing, unequivocally - it's a very solid defensive wall, has a lot going for it being able to neutralize the ability of physical attackers, it can be a nice little addition to the team in case you're missing any kinds of walls, and so far the only rival it has in that department is Runerigus, its Galarian counterpart. But my favorite part of Cofagrigus is its concept and design; Yamask, its prevolution, starts off carrying the mask of the face it used to wear as a human - then that mask becomes an ornament on the sarcophagus part of Cofagrigus. Its color scheme is really cool, too and goes along great with an Ultra Ball, imo.

Also, as long as I'm talking about Cofagrigus, as I was searching up Cofagrigus's artwork, I found some really cool pics without meaning to; whoever made these, good job. These are great.

I'll be honest, I don't really have a least favorite; this is one of those types that I don't really have many that actively annoy or frustrate me, or visually repulse me either. It's a weird situation. There are a few that mildly bug me, though. Mainly the Kalosian Ghost/Grass-types in Phantump/Trevenant and Pumpkaboo/Gourgeist - why are they trade evolutions? They don't need to be!

Retrieved from "https://fantendo.fandom.com/wiki/User_blog:Darth_Phazon/Pok%C3%A9mon_Type_Faves_(S3)_Episode_14:_Ghost?oldid=3103793"
Community content is available under CC-BY-SA unless otherwise noted.