Last season, I compressed the fossil Pokémon into the Rock-type episode, but since Galar gave us 4 new fossil Pokémon I now have a reason to separate the two again, especially since the new fossils aren't Rock-types (shockingly). 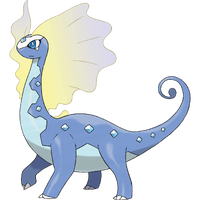 One of the Kalos fossils has proven to be one of my personal favorites of all time. Aurorus is beautiful, cute when its a baby, and a very solid offensive type: Power Gem, Freeze-Dry, Refrigerate-powered Hyper Beam, even moves like Nature Power (which can be a Refrigerate-boosted Tri Attack); its Hidden Ability makes its Blizzard more powerful as well, since 100% accurate Blizzard is something to be feared.

It's not every day a spot that I have in these blogs is occupied by a 4-way tie, but these abominations somehow made it happen; look, I get what they're based on, and I know why they are they way they are, but that doesn't make them any less ATROCIOUS. Game Freak wanted to make abominations with them, and succeeded.

And it's not just design that makes me hate them either. The Pokedex entries for each of these species talk about how the Pokemon went extinct for being literally unfit to live; not to mention, these things emanate an expression that makes you think you're better off just selling the fossils and they're better off never being resurrected. You guys remember that Jeff Goldblum quote from Jurassic Park about the power of science? That scientist who revives the fossils (her name's literally Cara Liss) should have all her credentials stripped because she's literally the personification of that quote: she has the most awesome power the world has ever seen and wields it like a kid who just found his dad's shotgun, and she's so preoccupied with whether or not she could, she never stopped to think if she SHOULD.

The only way I could ever like these fossils is if in Gen 8's third version, they introduce the complete version of the fossils. Hey, it could happen: Blacephalon, Stakataka and Naganadel proved they're not afraid to introduce new Pokemon mid-generation, so the question is if we'll get the complete fossils down the line. I will give Dracovish its due, though: it's apparently a monstrous physical sweeper.

Retrieved from "https://fantendo.fandom.com/wiki/User_blog:Darth_Phazon/Pok%C3%A9mon_Type_Faves_(S3)_Episode_11:_Fossils?oldid=3102003"
Community content is available under CC-BY-SA unless otherwise noted.