Welcome to the official devlog for Super Smash Bros. Unbounded! Here, you can find information about the game that I didn't feel was neccessary to put in a Dude Direct and/or just general talk about working on the game. Don't expect any big announcements here; just some dude on the internet rambling about his Smash game.

Today, I finalized the game's DLC fighters, as well as the stages in entirely. As always, these could change depending on what Sakurai does for the second volume of the Fighter's Pass, but for now, I'm confident in my choices. While I won't disclose how many DLC fighters there will be, I will tell you the final number of stages: 172.

I've also been hard at work on the revamping of the Mii Fighters. While work is still yet to be done, I overall enjoy the route I'm taking with them, and I hope you will as well once I finally unveil them.

One final note: The trophy list will soon be in development, and I hope to get some info on that out in future entires. For now, though, this is all I've got.

Today was nothing big; Just starting work on the game modes section of the page.

Instead of going into depth with this (since there's not much to go into depth about), I'd like to mention that Coin Battles from Smash 4 will be returning in Unbounded. I always found this mode kinda fun, and I don't know why it was cut from Ultimate. Fellow Coin Battle fans, this one's for you.

Today I finalized the plans for the Kirby and Star Fox characters. ...That's it.

However, I did want to clarify what I'm going for regarding the newcomers as a whole. While it is true that many of the newcomers will be from already represented franchises (such as the recently revealed Waluigi), a lot of emphasis has also been put into representing new ones that haven't had playable representations in Smash. Without going into too much detail, a lot of characters in Smash Unbounded will be third-party fighters. This means that a franchise you feel deserves more reps may not recieve them.

Of course, this is all subject to change. As the Fighter's Pass Vol. 2 for Smash Ultimate progresses, up to six newcomer slots could be added to Smash Unbounded, which is something I would enjoy seeing. Even though I focused on a blend of fan-favorite first-party characters and third-party, there are some other first-party reps I'd like to add. I have a list of characters I'd like to add should space allow, and I hope I get to add at least a few of them.

To make a long story short, a lot of third-party characters will be in Smash Unbounded, but should the results of Ultimate's Fighter's Pass Vol. 2 result in additional slots being opened up as a result of the promise I made in Unbounded's first Direct, those will be dedicated to some first-party characters.

That's all for now. Thanks for reading, and have fun with Byleth when he comes to Smash Ultimate later today!

UPDATE: I did a little bit more work, namely finalizing the plans for base game Mii costumes. I'm proud of the line-up, and while I won't mention much in the name of specific costumes until release, I think people will be pleased with what I've chosen. After I finish the DLC costume lineup, I think I'll be ready to talk about Miis in further detail in future Directs.

I continued working on the various game modes today, and that's about all I've done.

I did want to mention one mode I'm super excited to talk about more in detail: Assist Smash! I'm happy with what I came up with for this mode, and I think it'll allow for more characters to bask in the Smash spotlight. However, more info about this mode will have to wait until the next Dude Direct.

Before I go, I'd like to note that I started this dev log while I was in the middle of school exams, meaning I got out of school a little earlier and had more time to work on Unbounded. With exams over and school returning to a normal schedule, I have less time to work on the game, so please bear with me, as big groundbreaking info about Unbounded probably won't be mentioned here that often.

Not gonna lie, I'm not really feeling like working on Unbounded today. The exact reason for this is something I can't determine, but regardless, there probably won't be any new info today. Sorry.

Today I kept working on the DLC characters for the game. Of course, since these characters are intended to be DLC, I won't be able to talk about them until MUCH closer to launch. However, I think I made some great choices and perhaps ones that weren't quite expected. I hope people will be happy with what I've come up with! :)

With a new month comes new box art for Unbounded! Give it a look!

Credit for the renders goes to ThisCGIDude (Mario), Nanobuds (Link), XFlame-The-FoxX (Samus), and Nibroc-Rock (Kirby) on DeviantArt. Special shout-out to Veevee on the Fantendo Discord for advice with the logo coloring! 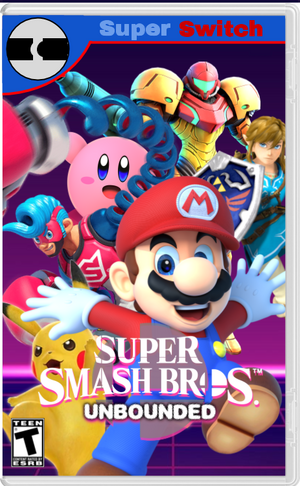 Before anything else, I'd like to note that Smash Unbounded will now be released in Spring 2020 as opposed to Summer 2020. Please read this blog post for more info.

Also, I decided to try my hand at designing the game's HUD. Give it a look!

Please note that Movie Sonic will not be playable in Smash Unbounded, he was merely for practice. If you have any critique or suggestions for the HUD, please don't be afraid to shoot me a message on my Message Wall.

Today, I designed what may be the most complicated of the DLC fighters. I won't reveal who they are right now, and they probably won't be revealed for a good while. I just want to note that although their moveset might have been more complex than I had envisioned, I think my efforts were worth it to fully represent their skills. You'll see what I mean when they're revealed. ;)

I meant to post this yesterday, but got sidetracked with something.

I've started creating the table for the veteran stages, which may take some time to do. Regardless, this is the first big formatting thing I've done for the game, and I'm excited to try other things with tables in the future.

In semi-related news, the next Dude Direct is in the planning phase! I hope to get it out this month, but please understand if it's released in early March instead.

Hey folks! It's been a while, huh?

I've been working on another project lately, so there hasn't been much done with Unbounded. However, I did put together a list of "fallback" characters to add to the game in case one of the planned newcomers is put into Ultimate's second Fighter Pass.

As I mentioned earlier, an emphasis on veteran franchises will be put into the base roster in case this happens, and I have a few characters in mind reflecting this mindset. However, for the planned DLC I have, I'll replace any confirmed character with a representative from a new franchise. I've got some ideas for these, and some of them are pretty out of the box. Again, though, none of them may make the final game based on what actually happens with Ultimate.

In other news, the next Dude Direct will release on February 16th, featuring some new Unbounded fighters and an announcement regarding a new project! See ya then!

Sorry for the silence lately, folks. Truth be told, I've been hard at work with Smash Ultimate x FNaF, so not much has been done with Unbounded lately. However, once that is released, I'll kick Unbounded's development into overdrive: Release is sooner than you think!

Smash x FNaF is complete, so it's back to work on Unbounded!

Today, I kept it simple by continuing the veteran stage table. Hopefully, I'll get it done by the end of this month so I can work on the more complex tables.

Speaking of end of the month, I'm planning on releasing a Dude Direct Mini on March 1st. This won't be as big as my regular Directs, but trust me; There's gonna be some Unbounded news. Heck, maybe even a new fighter if I'm feeling nice.

The veteran stage table is complete!

I'm not going to work on the game for the rest of the month, as I've got some other things I've got to take care of. Who knows, maybe you'll hear more about them soon.

Today was mostly visual work as I completed the character selection screen. I can't show it off for obvious reasons, but I'm proud of the way it came out!

Here's the final character selection for Smash Unbounded! I put bars over all the unannounced newcomers, but there still may be some clues left in to determine who they are. Have fun speculating! 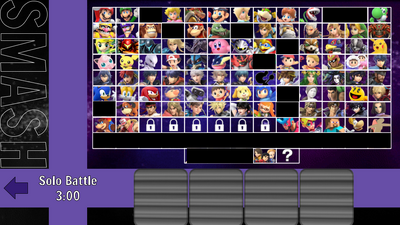 Hey there! It's been a while, hasn't it?

I've decided to semi-revive the Dev Log as I get to work on the final, more tedious aspects of Smash Unbounded. There won't be an update every single day, but please feel free to tune in whenever you can to get a glimpse into how development is going.

As I've mentioned in the last Dude Direct, my current focus is on the Poke Ball Pokemon. Originally, the plan was just to bring in most Pokemon from previous Smash games and add a few new ones for Sword/Shield. However, as I was thinking about it while wrapping up the base game fighters, I realized that there was pretty inconsistent balancing between each generation's representation.

To counter this, I decided to go back and refine the lineup. While every Pokemon from Smash Ultimate will return as planned, Pokemon from 64 to Wii U/3DS will have more strict guidelines:

Those two questions will be asked with most Pokemon, both returning and new.

Speaking of, I've also decided to revise the criteria of new Pokemon; Not only will Galar Pokemon be added, but a variety of Pokemon from throughout the series. I hope you're looking forward to seeing some fan favorites join the lineup!

As for the lineup itself, I'm still working on it. I hope to have the final list finished and put onto Unbounded's page by June 12th at the very least. Hopefully, it'll be worth the weight!

Anyway, that'll be it for this installment in the dev log. Before I go though, I'd like to mention one last thing.

The trailer opens as the camera pans across a desk, revealing various artifacts with varying degrees of value. As her relics are displayed, a female voice can be heard narrating:

"It's been many years since I've begun my raids. Ever since that crash, I've had to hone my skills to survive the wilds and whatever else life may throw at me. I've never suspected something like this coming my way, though..."

As the narrator pauses, the camera stops panning, focusing on a Smash invitation.

Lara Croft from Tomb Raider puts her survival instincts to the test as she joins the Smash Unbounded roster! While I'm keeping her moveset and stage a surprise for now, please expect them to come to the game tomorrow!

Retrieved from "https://fantendo.fandom.com/wiki/User:TheFazDude/SSBUB_Dev_Log?oldid=3223293"
Community content is available under CC-BY-SA unless otherwise noted.