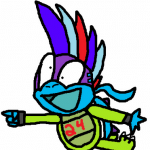 Rules for my characters

Note that all of these characters belong to me.

Also note that if you use Commander Nova and Haiku in a game, I have permission to edit the game they are in. However, if you ask to use them, then I can't edit the game.

Also note that I have the rights to take my characters out of the game if I don't like what they're doing in the game.

I'm Lemmykoopa24 and this is my user page. I like RPG's and War Games, I also became a huge fan of Starfy recently. But my fav series is the Mario series. My fav series are Mario, Kirby and Starfy, I also like Battalion Wars and Final Fantasy! I'm also a big fan of the Koopalings, but I like Ludwig the best. I'm good at making 2-D images, but I can make 3-D ones too. I am a ninja penguin, just so you know. So long!

People I want to be friends with

King Dedede: The Day of Judgement

Upon the day that I leave Fantendo forever, here is my will:

I leave all my games to McQueenMario, my characters and artworks I leave to Dk64rules. My company I leave to YoshiEgg, and everything else goes to Ryushusupercat. I probably won't leave for a long time, so none of this will happen any time soon.

I made an account, and for that I rock!

Would you look at that, I'm SO friendly.

My Eggshell.
Add a photo to this gallery

“If it doesn't matter who wins or loses, then why do you keep score?”
— Unknown.

“Nothing is impossible”
— Somone Who Has Obviously Not Tried Dribbling A Football.

Retrieved from "https://fantendo.fandom.com/wiki/User:Lemmykoopa24?oldid=1036273"
Community content is available under CC-BY-SA unless otherwise noted.