Hello everybody, this account is currently not under use anymore, and I have actually since switched accounts. I'm leaving this userpage up for memories though.

Go find me at .arcticbreath 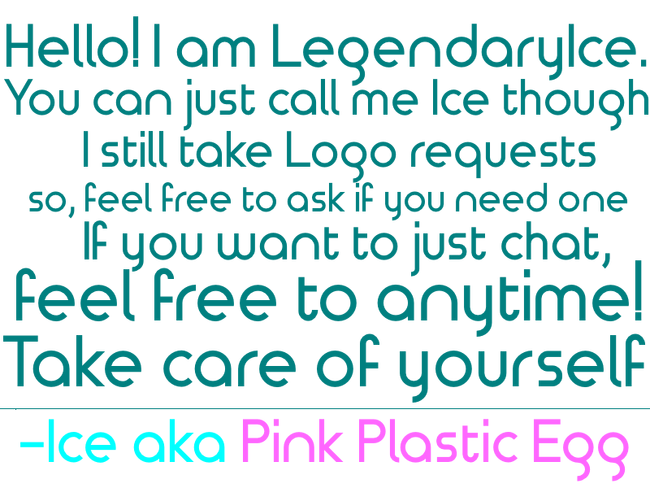 IF I'M GONE FOR MONTHS WITHOUT ANY NOTICE, OR GETTING BANNED, ASSUME I'M DEAD

THAT SAID WELCOME TO

We have lots of stuff to do here, despite the fact that nobody is here and everyone is dead.... WELP LET'S NAVIGATE THE TABLE OF CONTENTS FRIENDS!!

Up here on the Mountains, me and my Polarbear, Trev, listen to the wind. They make oddly specific noises for wind... HEY! How about I share with you the wind I like to listen to the most!

Well there's one that sounds like guitar, and a male voice saying "Bones sinking like stones all that we fought for, homes places we go all of us are done for"... something like that

Oh! And this other one about this guy singing about houses of gold?

Alright, that got a bit creepy... well erm... that's basically all there is to the Mountains

This place is special to me because... well it's a bunch of ice, so I feel at home here. But also because there's a lot of Penguins here who I have all befriended. Just to name a few, This one is slightly blue-ish purple so I named it Indigo ,One time, this penguin almost fell off an edge whilst eating a snickers bar, This one came from Dubai... dunno how it got here and this one really REALLY enjoys memes for some reason... don't ask me. Yep, they're all pretty great though, that's not even all of them, I have a lot more penguins but I assume they're at the bottom of this Lake, so let's go down here!

Bottom of the Ice Lake

Down here there's a bunch of garbage... like a lot of it.. a lot of un-used stuff, but I mainly come down here for the TV to watch Movies, TV shows, and whatnot. and Surprisingly the TV works. Well anyways, I usually find just random TV shows playing on the TV when I come down here, like the one playing right now about A bunch of people who do things in an office, I watch this one almost daily since it's always on whenever I come down here. But I also like watching some of the rare ones that come on.. such as this one about FBI agents trying to find out who bombed this New York place..., or the one about the girl who literally knows nothing about social norms... but alongside random TV shows playing down here, there are also a lot of Movies that end up down here, some of my favorites include: this guy who saves these people from a Nuclear attack or the one about talking Cars , eh I love all of them to be honest. Anyways, it's chilly down at the bottom of this lake, let's go to the top to my HOUSE

WELCOME TO MY CABIN! I've been living in here for all my life, and there's almost nothing to do. So, why do I say almost, you ask? Because I play VIDEO GAMES ALL DAY. Yeah, sometimes it snows Video Games, because they're picked up out of the ocean during the Water cycle or whatever... but yeah I find them frozen inside of balls of ice that fall from the sky, and goddamn they are fun. A lot of the labels are unreadable, so I have to ONCE AGAIN describe things to you. Uhh... I like this game about SplittingTime,  and this racing game about italians and dinosaurs is pretty fun,  and I ESPECIALLY love this game about twilight persons trying to take over the world. Like I said though, I love pretty much anything I get, because there's not much to get down here unfortunately...

For the last place we'll be going, I'll show you my Glacier. My glacier is one of my favorite places to go to, because it has one thing that I made inside of it-- INTERNET. I made it out of a bunch of snowballs and penguin corpses. With the internet I can, for example, go onto Youtube, or I could go to... What the heck is this place???. Um, this is a cool website I guess. I've never been on it, but it has cool things! Like stories about boys who go on neat adventures and an amazing community. They even have this really cool neato guy who made the article, whoever he is he sure is handsome and super duper cool wow I can't even believe how cool woah. Well, anyways, that wraps it up

Thank you for stopping by the Arctic, come back soon!