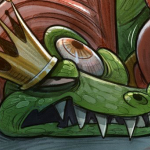 Welcome! I don't tend to edit my user page often, but you've found your way here. I maintain a company on here: Ghostrealm Studios. All of my content is under that name, so go visit there. And if you want to collaborate with me, go ahead! I've been on Fantendo for a while (albeit I only officially joined the community recently), and I've created some awesome stuff. My favorite article of mine is probably Super Mario Excursion.

2004. I was playing Melee in daycare. Had no idea what I was doing. Fast forward a few years, and I get a Nintendo DS with New Super Mario Bros.. Fell in love with that game. Come my birthday in October, I've got a Wii. And boy did I play it a lot. Super Mario Galaxy still holds a place in my heart as my favorite game of all time. Super Smash Bros. Brawl was also big for me at this time, and I played it religiously. I also played Super Paper Mario, Mario Party 8, Wii Sports, and countless other great games for the Wii. During this time, I got into Pokemon as well, starting with Pokemon Pearl, but Platinum was the first I played to completion.

Around 2010, I hear about this little website called Fantendo. So I make an account and create fake games. (Looking back, some of my old stuff was pretty shitty). I come back and forth from here, and I occasionally make stuff.

So Nintendo's got this shiny new 3DS console in 2011. I buy one, and I fall in love with Star Fox 64 3D and Super Mario 3D Land. Then it goes missing. I'm forced to play my regular DSi XL for a bit. Then, the Wii U comes out. I play Nintendo Land and Mario a bit, and I get bored. At this point, the Minecraft craze is at its height, and I'm sucked into that void. PC gaming consumes me for the next few years, but I do manage to keep playing Pokemon on my DSi XL and eventually my 3DS XL. In terms of PC gaming, I play stuff like World of Warcraft and Team Fortress 2.

Fast forward to 2014, and I get Mario Kart 8. The Wii U pulls me back in with that game. It's also my favorite year for Nintendo, when Super Smash Bros. 4 comes out. Nostalgia consumes me as I play it constantly, and I buy a bunch of amiibo too. Around early 2015, I buy the Majora's Mask remake for 3DS, and I fall in love with the Zelda franchise. Later on, I buy a GameCube along with Super Smash Bros. Melee and Paper Mario: The Thousand-Year Door (one of my favorite games of all time). Pokemon also sucks me back in with Sun & Moon as I buy a copy of Moon alongside a New 3DS XL.

Then, 2017 arrives with the Nintendo Switch. After hours of camping out outside of EB Games (I'm Canadian), I get myself a Switch, Breath of the Wild's Special Edition, two amiibo, and 1-2 Switch. And now, Super Mario Odyssey has dethroned Galaxy.

I love to write, which is evident from my projects here. I have this huge love of worldbuilding and creating concepts for whole universes and characters. I'm also a big fan of anime, having seen stuff like Attack on Titan, the Pokemon anime, Sword Art Online (smite me now), and many others. Japanese media is honestly better than western media.

I also love to talk about politics and the like, though my political views are in the center, leaning left. Yet, I support LGBTQ+ rights and most liberal ideals, and I'm not religious.

If your name isn't on here and you want recognition, toss me a message.

Accounts for Other Stuff

If you want to play games with me, I've got my accounts right here.

Retrieved from "https://fantendo.fandom.com/wiki/User:Krexxal?oldid=2960617"
Community content is available under CC-BY-SA unless otherwise noted.