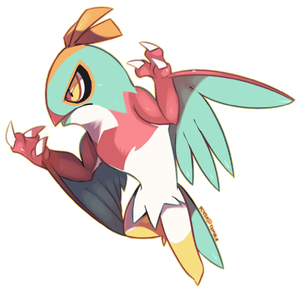 Soaring in straight from the faraway region of Kalos, the masked wrestler Hawlucha appears! Despite weighing in at a light 47 pounds, it wields incredible fighting skills that can let it stand up against towering terrors such as Machamp. Its winged cape allows it to fly in the air and attack from above, making it a very dangerous opponent in battle. In the world of Super Smash Bros., it brings its aerial technique and battle efficiency along with it to create a rushdown fighter unlike any other.

As previously stated, Hawlucha is a rushdown fighter, similar to others such as Captain Falcon. He's quick, and relies on overpowering opponents through physical combos since his moves are rather weak individually. Despite his rather frail defenses and low weight, Hawlucha carries 3 jumps and a decent recovery. His attack power is stronger in the air than the ground, which is great for aerial combos. However, he has no projectiles and very few approach options, making it tough to fight against a skilled projectile wielder. His throws are also very quick although not the strongest, and can follow into other moves well.

Hawlucha's greatest advancement, greater than any other fighter, is the Air Grab. By pressing the Grab button in the Air, Hawlucha will dash forward a short distance. If he misses, he will end up falling helpless. If he grabs someone, the player can press left and right to perform a powerful toss that can be angled, down to perform a diving crash, or up to perform a rolling toss upwards. These air grabs are more powerful than Hawlucha's standard throws, but lack the ability to pummel and generally do not last nearly as long as a grounded grab; especially since Hawlucha and the opponent will both descend during an air grab. With Hawlucha's air grab, he can manipulate his foe's position before striking with powerful aerial moves. In order to defeat Hawlucha, players will have to make skilled use of spacing to prevent Hawlucha from getting up close!

Hawlucha's Neutral Special is Power-Up Punch. Players can hold the special button as Hawlucha pulls back to draw energy into his fist. After around 3 seconds or once the button is released, Hawlucha will deliver a punch covered in energy. While the punch itself only does 1%, it still does a decent amount of knockback. This move can also increase the power of Hawlucha's next special attack by up to 1.2x. The multiplier depends on how much time Hawlucha charges up the attack.

...But what happens if a player tries to use Power-Up Punch as their next special? If Hawlucha has a full 1.2x boost, his next Power-Up Punch will be replaced by Dynamic Punch. It's a very powerful move that does a whopping 20%, but does not create any knockback at all, simply stunning the foe. If you act fast, this can be a fantastic way to build up a lot of damage and follow up, although it can be a bit tricky to set up due to how long it takes!

When the Side Special is used, Hawlucha will spring upwards and attack with a violent kick. This move is High Jump Kick. It will deal a good amount of damage if it connects, but will deal around 7% to Hawlucha when he lands on the ground if he ends up missing the move. At any time after pressing the button to initiate High Jump Kick, pressing the button again initiates Low Kick, a soaring kick as Hawlucha travels downwards. The sweetspot of this kick can meteor smash opponents!

Hawlucha's Up Special, Aerial Ace, is a decent recovery move but also a great move for combos. By holding in a direction quickly after initiating a move, Hawlucha will streak forward with his talons extended, crossing around half the distance of Final Destination. If you press the button again, however, Hawlucha will perform a turning cut. This will cause him to reverse and perform a second attack to end up back where he started. This second manuever is great for finishing off a combo, but be VERY careful not to use it during your recovery! After either cut, Hawlucha will fall helplessly.

Acrobatics is Hawlucha's Down Special. If used on the ground, Hawlucha will perform a flip and dive, sliding forward. If he comes into contact with an opponent during the dive, he'll perform a series of close-range attacks. Otherwise, the slide will deal very minor damage. If used in the air, Hawlucha will perform a twirling kick diagonally down. Coming into contact with an opponent unleashes a flurry of rapid kicks from above. The move isn't exactly strong, but instead at breaking shields or pressuring opponents with its multiple hits. It can also disrupt certain projectiles, but the move leaves Hawlucha open for a long time, so be careful!

Hawlucha's Final Smash is his signature attack: Flying Press. Hawlucha will immediately fly up into the air and initiate a sequence similar to the Dragoon, with a movable cursor. Target your enemies and press the special button or wait around 5 seconds to have Hawlucha swoop right towards the target. Anyone in his way will be grabbed and dropped into the wrestling ring, where Hawlucha dives down from above and performs the ultimate slam. This move does around 40% and vertically-based knockback.

Retrieved from "https://fantendo.fandom.com/wiki/User:Dyrandu/Sandbox?oldid=2903877"
Community content is available under CC-BY-SA unless otherwise noted.