Debuting in Super Mario World 1, Urchins are an infrequently-recurring enemy that appears primarily in water levels. They were blue in that game and Super Princess Peach, but have been purple in every other game since.

In 2D Mario games, Urchins will generally "attack" you by patrolling a specific area. They will go side-to-side between two walls, up and down between a floor and a ceiling, or follow a wall like a Spike Top. From New Super Mario Bros. Wii on, Urchins may also stand still. In Super Mario World 1, Urchins are very hard to kill, vulnerable only to Grab Blocks and invincibility; however, in newer Mario games, Urchins are vulnerable to fire. You can also ice Urchins; while they'll only stay iced for a second, they'll fall asleep upon breaking out, which can be exploited in NSMBWii to plug up Pipes with bubble jets in them and access new areas.

In the Super Mario Galaxy duo, Urchins instead lie on the floor, and when Mario comes near, they make a "sharp" sound and start rolling at him. These Urchins can appear on land. In lava levels, Urchins may have a red, fuzzy appearance to them. These Urchins are much more aggressive than usual.

The following games on Fantendo are known to have Urchins in them:

A Super Mario Bros. 1-styled Urchin, presumably made for a Mario Maker game. 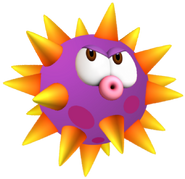 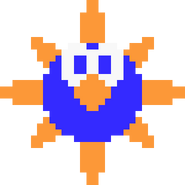 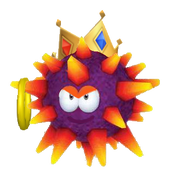 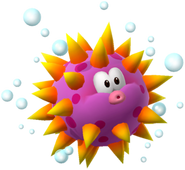 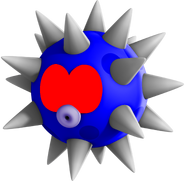 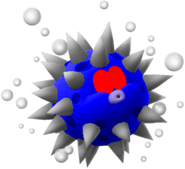