Start a Wiki
Unten Alexander Rosslington, or just Unten, is one of the main characters from the TOSWALAUNTIDNWTR reboot, 20XX. Like his original counterpart, Unten is the last surviving member of the Beorns and becomes one of main heroes of his land/city. He has saved his city from villains, along with Auvery, Fanti, Milli, and Alice Virsank. The group has many enemies, the main ones being a demigod named Dragmire, and "Unten's brother", Netnu. In all of the recent games he is in, Unten is voiced by Ryan Potter.

Unten was actually given birth to on Zeon by an unknown parent. He was given up at the last moment to the Rosslington family because Zeon was experiencing it's version of the apocalypse, The Reverse. They had to rush Unten off the planet as quickly as possible, and as they did, Zeon was shruken down to a single star. They soon landed back on their home planet, North Stationary.

Unlike other superheroes who lost their parents back when they were younger, Unten did not have superpowers of his own. Instead, he relied on his specialized gym class, which helped with his agility and strengh. He also learned how to use throwing stars when visiting North Stationary's version of Japan.

Unten just started college when he met Auvery, a funny yet not-smart friend, Fanti, a shy student who became loyal to Unten after he saved him from bullies, Milli, a rebel girl who isn't afraid to let out her dark side, and Alice Virsank III, the daughter of the mayor, named after her past two descendants.

Unten, like his other dimension counterpart, has blue fur, except more appearant. His eyes are green, with dark green pupils. His hands and feet are both purple. He wears a red vest with pockets on each end and black shoes with white laces. On occasion, he also holds a stone throwing star or wears a tan backpack.

Unten is a caring compassionate friend. He's respectful to his friends and parents, but has his moments where he seems to get angry or get miffed. Unten lets nothing get in his way when he sets a goal, making him determined. However, Unten, like most other people, can't be without his faults. Unten, as said before, gets mad sometimes, but half the time his anger gets the best of him, causing him to lose control.

Unten is also afraid of losing of the trust of his friends and family, which is a fear Dragmire sometimes uses against him.

Games He Has Appeared In 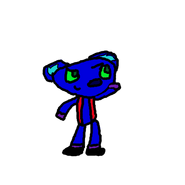 Dark's art of Unten.
Add a photo to this gallery

Retrieved from "https://fantendo.fandom.com/wiki/Unten_(Citiverse)?oldid=1722331"
Community content is available under CC-BY-SA unless otherwise noted.