Unown, known in Japan as アンノーン (Unknown) is an intriguing Psychic-type Pokémon, first discovered in Johto. Markings of it are found on the walls of the Ruins of Alph in Johto, the Tanobi Ruins on one of the Sevii Islands, and the Solaceon Ruins on Sinnoh, usually forming words. Unown are also only found in the previously mentioned ruins.

Unown are flat, thin Pokémon. Their body consist of a white eye with a black-blue pupil, a black skin covering said eye, and random appendages that form an alphabetic character, but for some Unown, a punctuation as well. Twenty-six Unown appear to resemble the Latin alphabet, and they also have their eye fully open. The other two, the ones resembling punctuation marks, have their eye rather half-closed. It has yet to be uncovered whether written language or the Unown came first.

It has quite its association with the Mythical Pokémon Arceus. When Arceus recreates time, space or antimatter, dozens of Unown appear to cooperate with the Alpha Pokémon. Also, Unown's form of communication (what is debated on to be either telepathy or electromagnetic waves) can be caught on via the Pokégear, which forms a melody out of it. Said melody is the same as the one played on the Azure Flute, a special item that allows its player to visit Arceus's abode.

Multitudes of Unown are capable of altering the reality and unleash great power, but a single Unown on its own is next to worthless.

Despite not legendary or mythical, Unown are quite rare and mysterious, said to live in their own Dimension and visiting the Pokémon world rarely. 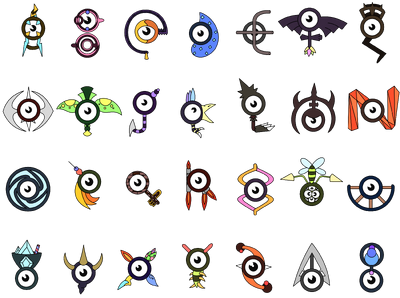 At some point, Unown recieved Mega Evolutions for all 28 Formes. Each Form changed its typing to some combination and each gained a new ability called Mysterious Power which gives the Unown 2 moves for each of its types.

All of Unown's formes are shaped after the 26 letters of the modern Latin Alphabet, with the addition of the Exclamation and Question marks. Their ancient history also makes connections to ancient writing and hieroglyphs in the real world.

Retrieved from "https://fantendo.fandom.com/wiki/Unown?oldid=3012786"
Community content is available under CC-BY-SA unless otherwise noted.