Unfezant (Japanese: ケンホロウ Kenhallow) is a dual-type Normal/Flying Pokémon. It evolves from Tranquill starting at level 32. It is the final form of Pidove.

The male Unfezant has a reddish pink, wattle around its eyes. Long, ribbon-like growths from the wattle extend over its head and down past its shoulders. By swinging its head, the male threatens its opponents. The male also has a mint green underside with speckling towards the chest. In contrast, the female lacks a wattle and has brown markings on its underside. It is also more adept at flying than the male.

While its pre-evolutions resemble wild pigeons, Unfezant most closely resembles a gamebird, such as a green pheasant, turkey or tragopan. It is also similar in appearance to the greater roadrunner. Unfezant's gender differences reflect sexual dimorphism in real-life birds in that males have large wattles and are more colorful than the females. 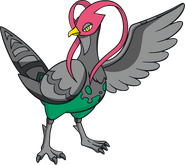