You may be looking for Exotoro's character.

“No, you don't understand. I'll never have a happy ending. My parents sent me nearly 6,000 years into the future, I got caught in the midst of a galactic civil war, and now that power-hungry PARASITE is enslaving humanity while I'm stuck in a time I never fully got to know because my parents couldn't even take care of me. I don't even know who I AM anymore. How am I supposed to be happy with anything?”
— Umbra, Shadowcalypse 3: Empress of the Cosmos


Umbra Shader is the main protagonist of the Shadowcalypse series. He has the power to control darkness, due to his being born during a solar eclipse.

On his fifth birthday, his parents mysteriously disappeared. He was raised by his uncle on a lunar colony. Ten years later, his uncle vanished as well, and Umbra sets out to find him, as well as to discover who his parents truly are.

In Lord of the Blood Moon, Umbra learns from Nebula that he was born in 1998, and not 7880 as he believed. He was then sent back to the year 2016 with Andromeda, who became his girlfriend afterwards.

Umbra won't back down without a fight. He strongly believes in his allies and will do whatever it takes to get back anyone who is captured. However, he is slightly arrogant and sometimes tries a little too hard to protect his allies.

He initially denies any romantic or sexual requests; his primary goal is to uncover his past and find his parents, and according to him, he "just doesn't have time for sexuality". But when Andromeda enters his life, he begins to question whether he really is asexual. He later admits his feelings for her, and seeks to help her at any cost.

Shadowcalypse: Master of the Eclipse

Umbra appears in this game as the only playable character. He sets out to find his parents after his uncle vanishes. Uniting with Upside and Reverse, he goes up against his nemesis Queen Nebula, who reveals that she knows what happened to his parents at the end; however, she did not tell him for unknown reasons.

Shadowcalypse 2: Lord of the Blood Moon

Umbra is now looking for a rogue Iconoclast named Russell Zhakamovich, and meets Andromeda for the first time.

He leads the resistance against Nebula, and it is later revealed that he was not actually born in 7880, but 1998. His parents sent him to the future to live with his "magnificent nephew", who pretended to be his uncle until some Cosmotroops killed him for being an Iconoclast.

When he is sent to the past with Andromeda, Umbra decides that he doesn't care about finding his parents as long as he is with Andromeda. It is believed that she is now his girlfriend.

Umbra was announced to be part of Victory's roster on 5/4/17.

After being banished to the past (the present now), Umbra is now having to deal with the antiquated past of 2019 with Andromeda. Having lived in the past for 3 years now, Umbra and Xerra seem to know the course of events that will transpire, but both have foggy and unreliable recollections that differ slightly.

Umbra joins the Fantendoverse's World Tournament as one of the contestants. He is pitted against Millyrain in the first match, eventually losing to her after a close battle. He later joins the Redemption round in an attempt to prove his worth, only to lose again, leaving him doubting his capabilities while the eliminated contestants wait together.

Though Umbra doesn't appear in Stampede Breakfast 2, King Boo does have an alternate costume based on him. He wears a wig that is identical to Umbra's hair. 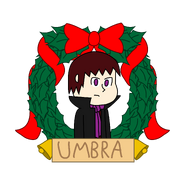 Umbra, as he appears in Fantendo Boom. 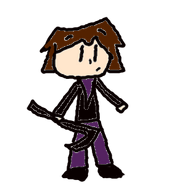 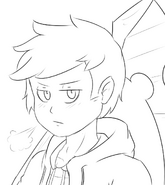 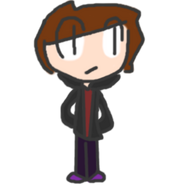 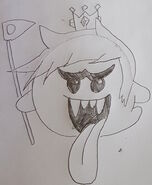 Umbra without his jacket, drawn by Redwinggamer95 (t∣b∣c).
Add a photo to this gallery

Retrieved from "https://fantendo.fandom.com/wiki/Umbra_Shader?oldid=3126135"
Community content is available under CC-BY-SA unless otherwise noted.