Umbra Eronigo is the incarnation of Niko Koopameleon Jr. He is the 5th oldest Eronigo, inbeween Anubis and Hypnos in age.

Umbra generically looks a bit like Artici Eronigo's first appearance. Umbra is pretty chubby as well. He has a weird hairstyle, which Aiva Koopa refers it as "Brony Hair". His shell is dark blue with purple rings. He is the only koopaling with purple eyes. He wears spiked wristbands. He has eyebrows and horns. He has 2 teeth in his mouth.

Umbra's body changed a lot since 2014. His skin is now a mixture of dark blue and gray. His shell is still the same as his old design. His eyes are now blue. His head is now purple. He still has 2 fangs, but a tooth in the middle and on on his left. His hair, eyebrows, and horn rings are now gray. He appears a bit taller, buffer, and fatter.

Niko was renamed to Umbra during the events of 2017. He also changed his species. He is a zebra Eronigo. His skin is gray with blue stripes. His eyes are purple, like in all of his designs. He has a zebra tail. His wings are blue and gray. His hair is still the same, only with a lighter gray tone. He still has 2 visible fangs popping out of his mouth. He also has zebra ears

Nothing much changed about Umbra from his 2017 reincarnation, except he looks more tribal-like. Umbra is now also the only "True Eronigo" alive. He now has hooves for feet. He wears "Indian underwear." He is also a bit chubbier. He dyed his hair to a blonder color. His muzzle is now cat-like. He wears a necklace saying "U," referencing his name. He also wears a robe-like fabric around his chest.

A 3D artwork of Umbra's old look by Eva. 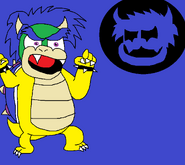 Umbra and his emblem by Aiva

Umbra 3D-ish are by Aiva

Redesign by Aiva
Add a photo to this gallery
Retrieved from "https://fantendo.fandom.com/wiki/Umbra_Eronigo?oldid=2518660"
Community content is available under CC-BY-SA unless otherwise noted.