The Ultimate Chimera is an enemy in Mother 3. It is a chimera which takes on a hideous appearance due to being a combination of DNA from numerous different species, in spite of very few chimeras having been formed from more than two pre-existing structures or genetic codes. After Lucas and friends defeat the rogue Almost-Mecha Lion at Chimera Laboratory, the facility is thrust into red alert as scientists have been overwhelmed by the Ultimate Chimera, which is now free to roam the corridors unbound. If it finds Lucas, the party will be automatically defeated, evidently ranking it one of the most threatening creatures in Mother 3.

The Ultimate Chimera was created by Dr. Andonuts in the Chimera Labs to be the ultimate killing machine, but it went rogue before he could destroy its last weakness, an off-button on its back. It is first encountered in the Chimera Laboratory, where Lucas has a terrifying experience with it. The Chimera cornered him and his dog, Boney, where Dr. Andonuts, hidden in a garbage can, tells Lucas to offer Boney as bait and to press the on/off button. Lucas refuses to place his pet in harm's way and is then subsequently cornered by the Chimera. Just as it dives at Lucas, Salsa jumps onto it and presses the button himself, deactivating the monster. After the Chimera is deactivated, Boney gets angry at Dr. Andonuts, who, claiming that his telling Lucas to use Boney as bait was just a joke, runs off, with Boney in pursuit, being one of the funnier moments in the game. However, the bird on its head simply pushes the button to revive it after everyone had left. It was encountered again in the bathrooms of the Empire Porky Building in New Pork City, where it was guarding a powerful ring. To get the ring, one had to enter the bathroom stall housing the monster, then quickly leave before it bit you. If you then waited in the stall connecting to the next room, The Chimera would then bust down the door to its stall and walk around the room, freeing you up to run in and grab its guarded Awesome Ring before it could catch you. In theory, it IS possible to run around the Chimera and open the present before it catches you, but this results in being defeated immediately after grabbing the ring and generally requires heavy abuse of emulation save states to accomplish.It is NOT required to get the Awesome Ring but is HIGHLY reccomended because it is the only one in the game and because it is a fantastic item for Lucas.

The Ultimate Chimera appears in Super Smash Bros. Brawl on the New Pork City stage, where it appears and disappears at random times. Like in Mother 3, it wanders aimlessly and attacks the player when he or she is too close, and if the Chimera's bite connects they will suffer up to 300% damage and get sent flying, almost always resulting in the player getting KO'd (though it is possible to tech the attack if the player strikes a wall). However, if the Ultimate Chimera is on the destructible platform in the bottom of the stage, the player will be able to "defeat" it by smashing the platform with the Ultimate Chimera on it. It then will roar loudly as it plummets out of sight. This is the only way to defeat it, as the off-button is not functional in Brawl. It will eventually respawn again, so it is impossible to truly defeat it.

The stage returns in Super Smash Bros. Ultimate with virtually no changes to the Ultimate Chimera's functions or behavior. 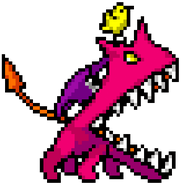 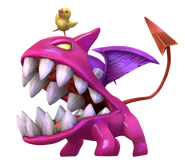 Ultimate Chimera in Super Smash Bros. for Wii U
Add a photo to this gallery
Retrieved from "https://fantendo.fandom.com/wiki/Ultimate_Chimera?oldid=3193909"
Community content is available under CC-BY-SA unless otherwise noted.