U-Rex (also known by the full name of Untensaurus Rex) is a giant dinosaur version of Unten Bluzen originating from an alternate universe. He is part of Demented Dimension, a group organized by Nebuel Tzunn Chadnezzar to join him on pranking other universes. He seems to be closer to an animal than a sentient thinker. The character was created by Helena Harper (t∣b∣c) to add to Nebuel's chaotic nature.

U-Rex is a massive dinosaur with Beorn features. He has small ears that are spiked up and has large star-shaped eyes just like Unten. He also has a blue color scheme and a purple colored mouth. His talons are a cyan color with giant back spikes of the same color. U-Rex also features dark highlights at the end of his limbs, like his tail, legs, and arms.

U-Rex is mostly a mindless dinosaur that likes to battle. They are sluggish but incredibly powerful and resistant. They can, however, be ridden upon and controlled if it feels like it's rider respects it as a creature. Due to it's animalistic nature, U-Rex can easily distracted with meat or fire. It also appears that it can get easily agitated and is a light sleeper.

Appears as the first character Nebuel Tzunn Chadnezzar summons from a portal. Obena attempts to fight him off while Unten strikes him to Imperium to no avail. He can later be seen chasing the Wasteland Warriors before finally "glitching" away when Nebuel is defeated.

U-Rex is a unlockable character in Beorn Battle Royal. Not much else is known about his appearance in this game.

U-Rex is a giant T-Rex with some of Unten Bluzen's abilities, such as limited use electrical charges that it can fire from it's mouth or electrify it's claws. It has a sturdy skin, allowing it to take a direct hit from Imperium without even really piercing the skin. U-Rex is also tied somewhat to Nebuel's abilities, as when Nebuel disappears, so does U-Rex and the rest of what is considered Demented Dimension. 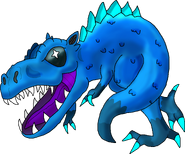