Tyranitar, known in Japan as バンギラス (Bangiras) are a Rock and Dark type Pokémon that are considered pseudo-legendary Pokémon, due to their high stats. This is the final evolution of Larvitar. It is a Generation 2 Pokémon.

Tyranitar is a large, bipedal, dinosaurian Pokémon with a green, armor-like hide covering its body. It has two pairs of pointed teeth: one in the upper jaw and one in the lower. Several spikes of varying size protrude from the back of its head, neck, and shoulders. Both sides of its chest, the center of its back, and its knees have two triangular holes. There is a gray, diamond-shaped patch of scales covering its belly, and a smaller one on its back. It has three claws on its feet and hands. A ring of spikes surrounds the tip of its tail.

Mega Tyranitar has more gaps in its armor than its normal form, with four new triangular holes along the sides of its neck and one on its throat. The four on its chest are now larger with the top two containing red ovals. While the spikes along the back of its neck grow shorter, the ones on its head elongate to form prominent ridges along its brows. The center spike on its head becomes a long, upright horn. Its chest plate expands, curving over its shoulders and along its back to form three long, irregular spikes on each side of its body. The scales on Mega Tyranitar's belly have now become red instead of blue and seethe with energy, enabling it to emanate more power. It gains two sharp spikes on its knees, as well as more prominent leg joints. Its tail lengthens, with the three spikes surrounding its tip growing upward and outward. Its back had split open because of the overwhelming power from Mega Evolution.

Tyranitar is a powerful Pokémon with an insolent nature. It is extremely strong, and its thick, rocky hide gives it a good resistance to all forms of attack. Because of this, it is always looking for a battle and will not flinch at anything, though ignores opponents that it thinks are not worth its time. If enraged, Tyranitar sets off outstanding earthquakes that can completely change the entire landscape, destroying houses and mountains, often forcing cartographers to draw up new maps. It lives in nests made from demolished mountains. As a Mega Tyranitar, its instincts have only become more destructive, to the point where it may not even be able to hear its Trainer's orders. In the Galar region, it has a fierce rivalry with Duraludon, which it shares its habitat with, often battling each other in the mountains. 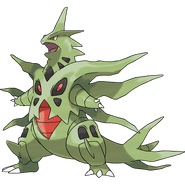 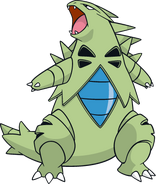 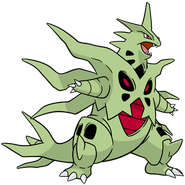 Mega Tyranitar's Dream World Artwork
Add a photo to this gallery
Retrieved from "https://fantendo.fandom.com/wiki/Tyranitar?oldid=3200115"
Community content is available under CC-BY-SA unless otherwise noted.