Fortune, more commonly known as Tune, is a Beorn and the twin brother of Fate. Tune is the adopted son of Oswald, the head of a small village located on Osiris-Grey, one of the moons orbiting the remains of Zeon, named Kurokasai.

Tune is a descendant of an ancient clan of Beorns known as the Wanderers, and as such has cursed blood that grants him supernatural powers. His biological parents, afraid of their heritage, mutilated both Tune and his sister, resulting in them being gifted artificial limbs.

Tune is a silver Beorn with scruffy hair covering his body, which gives his torso and limbs a shaggy appearance. He has beige bandages tied around both of his arms and his right leg. His skin, which can be seen on his paws, is purple. Tune also has black feather-like markings around both of his eyes.

Tune wears a red scarf with a blue crest attached to the left side of it. He also wears a satchel that hangs over his right hip. Tune's most prominent feature is his prosthetic left leg, which is of a red colour.

Ever since his parents cut off his left leg and his sister's right arm, Tune has had a hard time truly trusting anyone. This includes Oswald, who took the twins in and developed artificial limbs to replace the ones they lost. He only fully trusts his own sister, and will do anything to make sure she is happy; including trusting people that his sister believes are trustworthy. Despite his distrusting nature, Tune is a fairly sarcastic individual. He has a tendency to mock others or even serious situations he made find himself in. To most people, he comes across as rude, though his sister sees him much differently due to being the only person to have actually gotten to know him. He is also somewhat comedic, knowing when and how to crack jokes, though this is mainly done only to lift his sister's spirits.

Having the blood of a Wanderer, Tune has inherent supernatural abilities. When angered, he is capable of increasing his physical strength and speed and channel his aura into an electric charge that he can use as a projectile. Should he choose to, Tune is also capable of coating himself in purple electricity in order to create a large demonic entity around his body, which he can control just as he would his own body. Doing this is physically and mentally taxing on Tune, and thus he tends to only use it when in a rough spot.

Tune has a dislike of his biological parents, though acknowledges that they were right to fear the Wanderer's blood within him and his sister. He has trained in close-quarters combat, and primarily carries around a metallic bō staff when he travels outside of Kurokasai. Using only a small fraction of his power, he is also capable of electrifying his bō staff to paralyze foes.

Though he himself claims that he is a danger to everyone, as he doesn't even know how strong his powers are should he fully unleash them, he acknowledges that his sister is much stronger than he is. He created an enchanted necklace for her that keeps her powers in check, though he believes that she does not know this fact; to do this, he drenched the golden coin hanging from the necklace in his own blood, keeping it electrically charged at all times and granting his sister an incredibly small fraction of his own power.

Tune is also an adept guitarist. 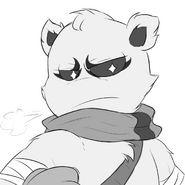 Retrieved from "https://fantendo.fandom.com/wiki/Tune?oldid=3332492"
Community content is available under CC-BY-SA unless otherwise noted.