Start a Wiki
Tsubaki Yayoi (ツバキ＝ヤヨイ) is a major character in BlazBlue franchise, before the multiple time loops caused by Nu-13, she was Jin Kisaragi's secretary until the birth of Noel Vermillion's existence in the time loop n°298.

When using the Zero-Type Izayoi, she can tranform in Izayoi.

Tsubaki is a serious, mature, and intelligent person. She has always followed her orders from the Control Organization and has complete faith in them (likely to honor her family name). She has always had a childhood crush on Jin, and deeply loves and cares about him. She was also good friends with Noel, Makoto and Carl Clover when they were at Military Academy. However, when Hazama told Tsubaki about the alternative timeline where she was always with Jin as his secretary and how Noel usurped that position away from her, she becomes extremely jealous. She begins to harbor a hatred toward her best friend that, once manipulated by Emperor’s magic, evolves into a desire to kill her in order to be with Jin. Even after changing sides, she still respects Hakumen despite sharing different views.

In BlazBlue: Chronophantasma, Tsubaki’s personality had almost been completely overwritten by the effects of Mind Eater, the spell that Izanami cast on her to control her directly. Her devotion to the Control Organization had been taken to its greatest extreme, and she was little more than a mindless drone who lived to carry out any and all of the Emperor’s orders, including killing her own friends. When Jin confronted her, however, she showed signs of resistance due to her feelings for him.

After Makoto, Noel, and Jin manage to free her from the Mind Eater curse, she realizes that the Emperor’s justice is a lie and decides that she will fight for a justice she believes in as an individual: to fight for the people she loves and the friends she cherishes. Even after eventually learning of Ragna’s actual blood-relation to Jin, she still acts antagonistic towards him, but comically dreams of an awkward possibility of accepting him as a possible brother-in-law. Another comical instance of her otherwise serious personality is her being infatuated with romanticized settings, as seen in Bang’s gag reel in Continuum Shift and/or her enthusiasm with the Six Heroes.

She is part of the BlazBlue DLC Wave 1.

Tsubaki appears as one of the BlazBlue minions.

Tsubaki appears as a Support Spirit. 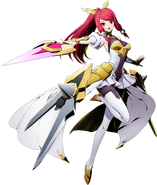 Izayoi in BlazBlue Cross Tag Battle
Add a photo to this gallery
Retrieved from "https://fantendo.fandom.com/wiki/Tsubaki_Yayoi?oldid=3236991"
Community content is available under CC-BY-SA unless otherwise noted.