Trumbeak is an avian Pokémon with black feathers. It has a long beak that tapers to a sharp point. The majority of its beak is orange, changing to light red and then black at the tip. The beak is flexible, and can produce at variety of calls by bending. It has round blue eyes and pale gray eyebrows. Pointed feathers extend from the back of its head and form a short crest. A white marking covers its face and extends down over its chest; the undersides of its wings are also white. Around its neck is a jagged, red band, and it has long tail with three tail feathers. It has spindly blue legs with two toes facing forward and two facing backward. This Pokémon feeds on berries. It stores the seeds in its beak and uses them as ammunition against both enemies and prey. 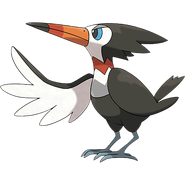