Tranquill is an avian Pokémon that is gray with lighter gray and black markings. Its beak and eyes are yellow, and there is dark pink marking above its beak that curves back over the eyes. It has a black, tuft of two feathers on its head and a petal-like arrangement of feathers on the nape of its neck. There is a black stripe on each of its light gray, black-tipped wings. Each pink foot has black talons. It possesses a long tail feather that is tipped in black. No matter how far a Tranquill travels, it is always able to return to its Trainer. It is said to live in deep forests, where there is a peaceful place without war.

Tranquill is the only Pokémon with a base stat total of 358.

Judging from its Pokédex entries, Tranquill may be based on a dove, often used as a symbol of peace, and possibly a homing pigeon, a domestic pigeon bred to find its way home over extremely long distances. Its design is similar to that of the greater roadrunner or secretarybird.

Tranquill is a combination of tranquil (calm or unstressed) and quill (a feather from the tail of a bird). It also involves quail.

Hatoboh may be a combination of 鳩 hato (pigeon) and 逃亡 tōbō (escape) or 尨 'bō' (shaggy hair). Additionally, some of the works of Kenji Miyazawa mention a fictional ideal world called 「イーハトーヴォ」 Ihatov. The Pokédex entry in Pokémon White says, "Many people believe that, deep in the forest where Tranquill live, there is a peaceful place where there is no war," which might be a reference to Kenji's utopia. 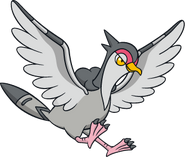