Fantendo - Game Ideas & More
Register
Don't have an account?
Sign In
Advertisement
in: The Threat Arc, Free to use Characters, Characters,
and 14 more

The Training Dummies are a group of characters that debuted in Fantendo Smash Bros. Victory's Training Mode and appeared as the opponents for every mission in Mission Training except for Application Test #3 and the fight against Hybrid IV. There are four types of Training Dummies, each with its own body shape, color of boxing gloves, and cloned moveset.

Each Training Dummy looks like the typical test dummy, used fr testing cars. Each has the insigna of Training Mode, which is a modified version of the logo seen in the Fantendo Smash Bros. series, with a black outline and one part filled in with black while the rest is filled with a lemon yellow. Each dummy has their own pair of boxing gloves that they use, which have different colors.

The Testing Dummies all use lowered pitched versions of the hurt sounds of their originals (Strafe, Unten, and Rachel) except for the Sparkling Training Dummy, who oddly uses lower pitched hurt sounds from Kass from FantendoQuest instead.

As they are Testing Dummies, they have no real personalities except to attack the Player if their AI is set to attack them. Rather humorously, their character infobox implies they are masochistic sociopaths who enjoy pain and violence and have a unanimous dislike for "Slime" and "Hurricanes", although if the player uses attacks with either of those elements, they don't seem to have a special animation or anything indicating their dislike for it.

Training Dummies were created by Hybrid IV to teach the students at Boltzmann, and are used by fighters recruited by The Fan and The Enemy to train and hone abilities.

Although they were programmed with the standard attacks of Strafe, Unten, Rachel, and Volt, they don't seem to have anything else in their movesets. The Sparkling Training Dummy is unique in that she has three jumps.

While they don't show up in the actual story mode, they appear in the Training Mode in Training Missions. They alternate for each mission, although the last two missions exclude them entirely. They also appear in other modes, although they have not been detailed yet. 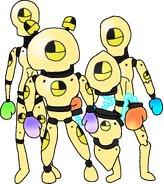 The Training Dummies as a group in Fantendo Smash Bros. Victory. 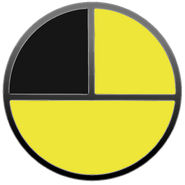