Toxcba is a Tostarenan who follows Mario on his adventure on his way to defeat Splitz in Super Mario's Split Kingdoms. He resides in the Oasis Village, where he calmly works as a shopkeeper. When used as a helper, he is able to give Mario a boost of speed for a few seconds at a time.

While he is not seen very much in the game, giving very little dialogue, he is still known to be very loyal and understanding, according to the leader of the Oasis Village. "He is always willing to help others out, and I'm sure he would be honored to receive a request to go on a journey to save the world." He says.

Like all the other helpers, he grants Mario all of his abilities when being used. Toxcba gives Mario the ability to run at amazing speed for few second intervals. A 3-second speed run requires 5 seconds to charge up for example.

Toxcba makes his debut in this game. He is a helper found in the Oasis Village. Not much is known about him in this game, as he gives very little dialogue.

Toxcba appears as a novice support spirit who grants Speed ↑. 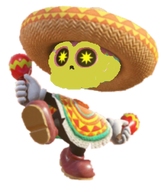 Toxcba's original image
Add a photo to this gallery

Retrieved from "https://fantendo.fandom.com/wiki/Toxcba?oldid=2971434"
Community content is available under CC-BY-SA unless otherwise noted.