Fantendo - Game Ideas & More
Register
Don't have an account?
Sign In
Advertisement
in: What is the New Fantendoverse?, Homosexual Characters, Females,
and 4 more

Topzy is a former Misfit turned Bartender that has the power of telekinesis. After retiring from being a Misfit, she moved to Albany, New York and took a bartending job to buy a house with her girlfriend. Her right eye's pupil was deformed into a swirl of sorts, and apparently has been like that since birth. She was born in the Bermuda but was smuggled to America by pirates, marketed as some sort of super soldier. She wears robes as it reminds her of her old home, although she has distanced herself from their ideals for a long time.

Topzy has been a character since late 2015 and has been a focus of several projects, although she was a major character in Misfits - Deadeye. She has developed as a character from an insane religious woman to someone with powers just trying to live a normal life.

Topzy was born in the Bermuda as worshipped as some sort of demi-god from birth, thought to be a gift from the gods because of her abnormal eye and telekinetic powers. Although, she was abducted at a young age after pirates had seen her potential. She was bought by a rather nice woman who kept her safe for many years, hiding her secret from others and keeping her isolated. When the Misfits Initiative program came up, she enrolled herself into it, moving into New York City to utilize her powers in a better way.

After the main Misfits team had split up, Topzy had moved to Albany where she had met a woman named Skylar. They both settled down into a house and Topzy began working a job as a bartender, attempting to live the normal life she once hoped for long ago.

Topzy, although once being an unstable, unpredictable woman, has calmed down as of late, still retaining the fact that she loves to mess with people, always making jokes to them. She hates being the center of attention and would rather just live a normal life as a normal person. She likes to lie low as opposed to making a scene. She believes that being famous is more of a curse rather than a blessing.

Although she is no longer as unstable as she used to be, a single thought could break her down in moments. She's still quite unpredictable, not even knowing herself what she will do.

Topzy has the power of telekinesis, although she herself has said she can't lift living beings up, the best she can do is lift them by their clothes or anything they have on them. Although this telekinesis can put a lot of stress on her, as it seems to put weight on her body in a way. She can crush things by clutching her fist of create a tornado by swirling her hands. Most of it is manipulated through her hands. 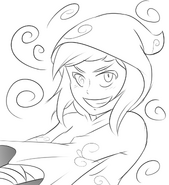