Toon Zelda (Japanese: トゥーンゼルダ Tūn Zeruda) is the version of Princess Zelda that appears in the Zelda games that feature cel-shaded graphics. She is typically only referred to as such to differentiate her from another Princess Zelda should the two different designs appear together in one game; while it is typically assumed that Toon Zelda's first appearance was in The Legend of Zelda: The Wind Waker, the first time "Toon Zelda" was used as her name was in Hyrule Warriors Legends.

Like all of the other Hyrulean princesses, Toon Zelda is a reincarnation of the Goddess Hylia and the rightful holder of the Triforce of Wisdom. Prior to the events of The Wind Waker (which is often considered her and Toon Link's debut appearance), the Princess Zelda of that era was forced to take on the alias of Tetra, a pirate captain, and had her memories of her family erased by her father in order to protect her from Ganondorf. The Hyrule Warriors titles primarily bases Toon Zelda off her appearance in Spirit Tracks, in which her spirit was separated by her body by her chancellor, Cole, in order to use it in reviving the demon Malladus; thus she often appears to possess an empty Phantom.

Toon Zelda has similar features to Tetra, such as her color hair and eyes. She wears and primarily pink dress with a golden belt and Triforce banner. She wears a pink scarf that has a golden lock at the front, and a pink pearl necklace. She also has a crown like headpiece and wings above her ears. On her arms are long white gloves.

Nintendo Plays: All Types Of Boarding!

Toon Zelda will appear in Nintendo Plays: All Types Of Boarding!

Toon Zelda is assumed to appear in the 2016 CGI movie adaptation of The Wind Waker. Miley Cyrus is set to voice her. 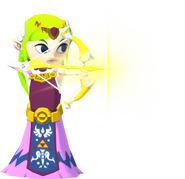 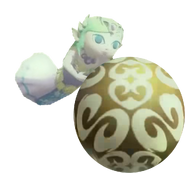 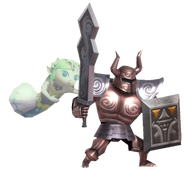 Add a photo to this gallery
Retrieved from "https://fantendo.fandom.com/wiki/Toon_Zelda?oldid=3142810"
Community content is available under CC-BY-SA unless otherwise noted.