The gameplay bears similarity to the previous titles of the Tomodachi Series, where you can own a island and solve the islander's problems in game, but it now features same-sex marriages, it can be enabled or disabled, if it is disabled, Mii's will fall in love with Mii's with a different gender, and now you will have extra control to the game, as you can decide who the Mii of your choice will befriend, who the Mii of your choice will interact to and how the interaction will be, who the Mii will fall in love with and you decide how it will end up, and how good or bad their relationships are, you can also decide what place the Mii will go to and what they will do and who will be included.

And Mii Characters are also used in this game, you can create your own Mii from scratch or import your Mii from the Mii Maker, or you can transfer your Mii from Tomodachi Life if it's updated, and you will choose what for age options the Mii will have, Child, Teenager or Adult, and you can decide what Mii is a relative to it, and you can choose what relative of the Mii it is, a Sibling, Parent, Son/Daughter, Grandparent, Aunt/Uncle, Cousin or a Nephew/Niece, the game will automatically treat it as the relative, to prevent someone falling in love with their relative.

The game also features friendship interactions, where you can help the other to make friends, and solve fights, there is a relationship list and how the status is, it has dark green (highest), green, light green, yellow, red, purple, dark blue (lowest), you can edit the statuses by yourself.

There is also a event where a huge/hostile fight can occur, neither Miis that are fighting with each other would apologize, you have to ignore them until a Mii wants to stop the fight, if they continue fighting, they will no longer be friends, if it completes, the Miis will stop fighting.

As stated above, rivaling Miis can pop up in hilarious ways.

Interventions at the Beach

Interventions at the Park

Interventions at the Cafè

Interventions at the Observation Tower

Interventions at the Fountain

Interventions at the School

Interventions at the Music Hall

Interventions at the Train Station

Interventions at the Harbor

Interventions at the Fancy Restaurant

A Mii will want to set up a Mii with another Mii, if you disagree, you can change who you want or cancel the set-up, if a set-up goes well, the Miis being setted up will become sweethearts of each other, if it fails, they will thank each other for the hangout.

If you decide to make a couple break up, it will take place at the Cafè and the Miis will break up, they will both gain sadness, and you can also decide for them to come back together, also attempting, when the reconcilation fails, the Mii that attempted to get his/her ex back will gain sadness.

Some places does have some events, it starts at various times, all events from Tomodachi Life returns to this game, along with the new events for the new places, the Cafè's events have changed, you can host a Hangout 24/7 and which Miis will be in the hangout.

(Schools will close on Holidays and Full Summer)

The game takes place in a oridinary island, you are the owner of the island and you can choose your own custom name for the island, and you will take control of the islanders or solve their problems, you can tap on the icon of the place to visit the place. 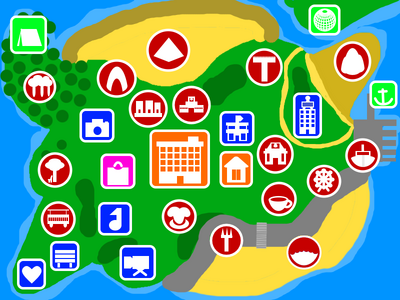 Problems is the main interaction of a Mii in the game, you are the one who has to solve these problems, it's possible that it may fail.

The problems are similar to the Normal Problems, except, they deal with interaction to other Miis, and their friendship

Full Map
Add a photo to this gallery

Retrieved from "https://fantendo.fandom.com/wiki/Tomodachi_New_Life?oldid=2439504"
Community content is available under CC-BY-SA unless otherwise noted.