“This smells good, but I should really watch my weight here...!! Oh uh-uh... I-I was just wondering around, searching for a little something. Its-Its not like that you would do anything helpful here, would you?”
— Tomelle, searching in the Chocolate Castle in Kirby & Magolor: Huge Trouble.

Tomelle (Japanese name is 牙・レンズ (Kiba-Renzu) which translate to Fang-Lens) is one of the three Draculock General Mages introduced in Kirby & Magolor: Huge Trouble! as the recurring secondary antagonist in the Helper to Heroes mode. She is from the Story Break World, and appeared before the other two Draclock Mages' actual appearance.

Tomelle is similar to the Jambastion Mages, however her robe is more pink than dark purple, and have dark-blue lines and a croissant moon instead of hearts. The emblem on the beret represent an alliance that is the Draculock Legion, and have dark blue hair (darker than Francisca's own blue hair), and is wavy similarly to the water element. She also have wavy blue eyelashes. Unique among both the Jambastion and Draculock Mages is that she wears comically large blue-tinted glasses.

Tomelle is overtly shy, yet surprisingly snarky and arrogant who is not above boasting herself, although attempts to do so usually ends up botched does to either her shyness or surreal arrogance. Nevertheless, she is also the most studious and have the most knowledge of the three Draculock Mages. She also tend to worries about her two acolytes being mad at her when she fails, although the other two would only express slight disappointment unless if the mission is an emergency, in which turns into anger at worst.

However, when she wasn't full-on shy and instead become happy or furious, she not only raise her tone, but also become more confident or rude respectively, but this can also causes her to be much more arrogant, not that it makes her less dangerous; when she does become more confident or furious, she attacks even more than she usually do, leaving little space for the opponents' counterattacks.

Tomelle is a specialist of magic, moreso than her two acolytes, as she is using a Water Tome to invoke multiple water-based magics, in which she vaporize water to heal herself, solidify mist to make a heavy waterfall (or even more than one waterfall), throwing a bouncing water ball which explodes after bouncing enough times, and even makes copies of herself out of water to multiply her assaults.

She also uses an Ice Blender that spit out icy spikes that bounces thorough the arena, and those cannot be Inhaled by Kirby and characters with such ability. Although they can be melted out by flames, they will turn into water which still damages the opponents. The real way to break her Ice Blender is to use fiery or electric attacks against the machine, which will make it explode does to overheat or short-circuit and stops Tomelle from using it, and stuns her for a few seconds.

Although absent in the main game, she is the secondary main antagonist in the Helpers to Heroes mode, where she is searching for an object that would help the Draculock Legion, the alliance she came from. The Helpers mistook her for Francisca because of the similar outfit and the blue hair, although Tomelle softly (albeit in a snarky way) replied that they named the wrong lady. She also mentions her two acolytes and dear friends, Tachi and Morgen, before quickly put a fight with the Helpers.

She is confronted three times in Helpers to Heroes in three separate worlds; Chocolate Castles, Spinach Sardis (where she starts to use her Ice Blender) and finally in X-Star (being briefly powered-up by Exateno and named as Tomelle's Revenge, but only because Exateno just wanted some entertainment before he can do the real deal). After her third and last defeat, she had still found an odd stone tablet which contains an ancient language, and eagerly brings it to a magical story book and escaped from the Helpers.

Although her full role is unknown, she is confirmed to be appearing in this game, and Samtendo09 reveals that her two acolytes, Tachi and Morgen, will also make a full appearance.

Tomelle makes a surprise appearance as one of the recruitable characters of both versions of Fantendoverse X. She have three stars for her starting power ranking and her class is Mage. Her skill is the Ice Blender, and uses Tomes as weapons, starting with her signature Water Tome. She starts with three stars for her rank.

Tomelle assumed that Kirby is her enemy considering that he's the Pop Star counterpart of Story Break Kirby, and thus shows no respect despite being nervous about how to deal with the Pop Star Kirby. In later encounters, she becomes more confident and even started to find Kirby a sharp annoyance. Unlike Tachi and Morgen, Tomelle loves to throw subtle or not-so-subtle insults such as "pink matter" and "potato-filled bean".

She does not want to fight them because they had easily outnumbered her, although she had to do it anyway as she refuse to be seen as a coward. She eventually show some respect on them after the second battle and especially after the third battle, but she did warns them that the next time they met, she will not hold back.

Although she did receive help from Exateno, this is only because Exateno felt that it would be fair for a single mortal to fight more mortals (or if only one Helper is in the Arena, he just can't help it but wanting some entertainment), Tomelle is clearly fearful of him, refusing to even speak to him unless if really needed to.

Tomelle had actually met them once, and is not very fond of them because she finds Francisca a bag of mischief, Flamberge as rude and scary and Zan Partizanne as naive and disturbing (judging from how Zan Partizanne views the Jambastion leader). The Jambastion Mages themselves does not like her either, viewing her as arrogant and even annoying. 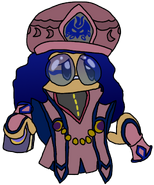 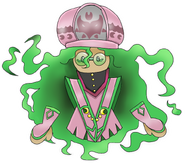