Tom Nook is a special character in the Animal Crossing series who plays a very important role in all of the games. He is termed a raccoon in the western versions of the game but a tanuki in the Japanese version. In all games prior to Animal Crossing: New Leaf, he owns the town shop. After the final expansion, Nookington's, he will employ his nephews Timmy and Tommy, who work on the second floor. In New Leaf, Nook has taken his interest in real estate to a whole new level, opening Nook's Homes, whilst Timmy and Tommy run the town shop in his stead. This continues over into New Horizons, where he is the one who charters the plane that takes the player to their new island home.

In Wild World, he will give out his picture if the player gives him the safe from the Golden Axe Trading Event.

Tom Nook is a tanuki (a raccoon in Western versions) with brown fur. His eye area has a dark brown mask-like shape for his raccoon eye characteristics. His nose tip, his hands, feet, and his tail are dark brown. The apron he wears over his lower half is inferred to be for modesty, a reference to the legends of the tanuki.

In Animal Crossing: New Leaf, Nook wears a white shirt with a red necktie and a green sweater vest over it. His sweater has a left sided pocket protector with a pen sticking out. He also wears black pants. Whenever outside of Nook's Homes, such as the player selecting their new home spot or at The Roost, Nook is seen with a yellow jacket over his sweater.

Tom Nook appears as an unlockable driver in Super Smash Kartz. He was not originally planned to be in the game, but in the end, he was chosen in favor of Dixie Kong. He is the only character chosen from the Animal Crossing Series.﻿

Tom Nook appears as a playable character in Jake's Super Mario Kart alongside fellow-Animal Crossing character Isabelle. In his first Mario Kart appearance, Tom Nook dons his green sweatervest design from Animal Crossing: New Leaf by default, though players can also choose to have him instead wear the blue apron he does when running Nook's Cranny.

Tom Nook appears as a referee. 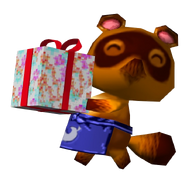