Toadies are enemies that usually travel in groups of four and are usually depicted as followers of Kamek and themselves somewhat resemble small Magikoopas but have propellers on their heads and are normally dressed in red.

Toadies appear as assist trophy characters in Super Smash Bros. Fusion. When summoned a group of Toadies will fly around the stage, occasionally trying to carry opposing fighters off the top of the screen. They can be attacked and defeated.

In the beginning of PoochyQuest: The Dogs Awaken, the Toadies were just a tribe with no leader, but after their last solo plot, Kamek finds them, thinking they look like great minions, and then hires them. 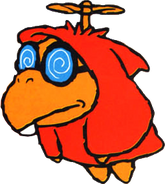 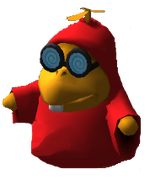 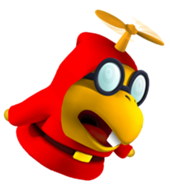 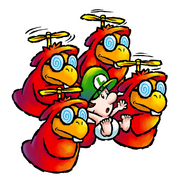